The Oval review: South Africa proved superior in all departments

After the opening day at The Oval, when Alastair Cook registered yet another century, everything seemed hunky dory for the hosts, and they seemed to be heading towards yet another comfortable Test.

After the opening day at The Oval, when Alastair Cook registered yet another century, everything seemed hunky dory for the hosts, and they seemed to be heading towards yet another comfortable Test. Remember, England haven’t lost a series at home in recent history. But, that could soon change if South Africa continue to perform the way they did at The Oval. But for the opening day, they were in total command of the Oval Test.

The wickets South Africans claimed early on day two proved significant in hindsight. Had Cook gone on to build his innings even further in the company of the middle and lower order batsmen, things could have been rather different. Instead, with the left-handed opener falling early, the Proteas got an opening and captalised brilliantly on it. What South Africa’s fight back did was bring the visitors right back into the game, and gave them the confidence as they closed out the England innings. 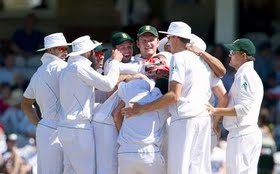 In spite of their inspired bowling effort, South Africans still had a long way to go if they wanted to make a serious impact in the game. And the way they batted was unbelievable to say the least. The South African dominance began with Graeme Smith and Hashim Amla grinding out a strong England attack, building a massive partnership while hardly looking in any sort of trouble.

En route to his knock, the Proteas skipper also got to his ton, playing in his 100th Test, which was a special achievement in itself. While Smith looked indefatigable, Amla was fluent as ever. Despite batting for a mammoth amount of time, the South African batsman hardly showed any signs of tiredness. In allthe hullabaloo surrounding Smith’s 100 in his 100th Test and Amla unforgettable triple hundred, Jacques Kallis’ quality ton was lost. However, it would only be pertinent to mention that the South African all-rounder also played a crucial role in keeping the innings in great shape, and taking it to even greater heights, following the dismissal of Smith. Had the visitors lost a few quick wickets following Smith’s dismissal, England could still have come back into the game, just like South Africa did on day two.

Once South Africa garnered a massive lead, England were always going to struggle. With such a strong bowling line-up, the hosts had their backs against the wall, and were kept there by Dale Steyn and co till the end of the match.