The Galle Test between Sri Lanka and Bangladesh is heading towards a dull draw on the final day. Bangladesh have secured the match by overhauling Sri Lanka’s first innings total of 570 for 4 declared by registering their highest ever total in Test Cricket.

The Galle Test between Sri Lanka and Bangladesh is heading towards a dull draw on the final day. Bangladesh have secured the match by overhauling Sri Lanka’s first innings total of 570 for 4 declared by registering their highest ever total in Test Cricket. The Tigers piled up 638 before they were bowled out in 196 overs! Skipper Mushfiqur Rahim scored Bangladesh’s first double century.

Sri Lanka starting their second innings with a deficit of 68 runs finished the fourth day’s play comfortably placed at 116 for 1 in 30 overs. Dilshan is batting on 63* (from 87 balls with 4 fours) alongside Sangakkara who is on 49* (from 78 balls with 6 fours). The only casualty for the Lankans was Dimuth Karunaratne who was caught hooking a Shahadat Hossain bouncer to long leg. 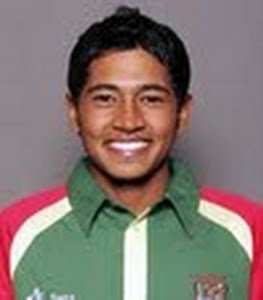 Earlier in the day, Mohammad Ashraful threw away a golden opportunity of scoring his maiden double century after he stepped out to loft Herath but only to give a sharp catch to slip. Ashraful finished with 190 (from 417 balls with 20 fours and a six) and his partnership with Mushfiqur was worth a record 267 runs for the 5th wicket.

Ashraful’s early exit did not distract Mushfiqur Rahim who was determined to score a maiden double hundred by a Bangladeshi Cricket. The Skipper also made sure that the Tigers inched towards Sri Lanka’s first innings total to secure the match. Mushfiqur (200 from 321 balls with 22 fours and a six) finally fell when he tried to flick across the line to a Kulasekara inswinger with the third new ball which had him out lbw. Rahim with Nasir Hossain added 106 runs for the 6th wicket.

Young Nasir Hossain who came into bat after the massive stand between Ashraful and Mushfiqur, played beautifully to help himself with a maiden Test century. Hossain scored 100 from 151 balls with 9 fours to take the Tigers into the lead.