In the end, the margin of victory for India at Hambantota wasn’t as significant as expected. Twenty one runs it was. And the key reason why India managed to get home easily in spite of a late surge by the big-hitting left-hander Thisara Perera was the magnificent knock played by Virat Kohli.

In the end, the margin of victory for India at Hambantota wasn’t as significant as expected. Twenty one runs it was. And the key reason why India managed to get home easily in spite of a late surge by the big-hitting left-hander Thisara Perera was the magnificent knock played by Virat Kohli. The Indian batsman scored his fourth ton in his last five innings. However, the even more worrying aspect for Sri Lanka is that three of those hundreds have been belted off their bowling. Unless and until the hosts find a way to stop Kohli from going after them, they will continue to struggle when it comes to beating India. 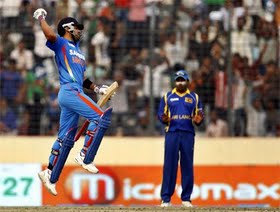 Once they get past Kohli, the task for Lankans becomes that much easier. This is because Rohit Sharma has continued to struggle and the Indian bowling isn’t among its strongest suit too. At Hambantota, only Irfan Pathan and R. Ashwin troubled the Sri Lankan batsmen. It was only because India had a big score to defend that they got home rather easily. Having said that, the victory cannot overrule their weaknesses.

Umesh Yadav is talented no doubt, but continues to be inconsistent. Even the experienced Zaheer Khan was good only in patches on Saturday. The other spinner in the side, left-armer Pragyan Ojha has definitely lost a bit of confidence after being axed from the squad earlier, somewhat unfairly.

In Tuesday’s game, the Lankans will be hoping for a chance in script. The hosts would be keen to put up a better effort in the field – they were uncharacteristically shabby on Saturday. Had they only latched on to one of the chances offered by Virender Sehwag, India would have been on the back foot very early on.

In contrast, the visitors managed to build a strong partnership, with Sehwag almost reaching a hundred. The Lankans would also be keen not to allow the lower-order batsmen like Suresh Raina and M S Dhoni to get away easily. The cameos that Raina and Dhoni come up with play a significant role in swelling the team total.

With Nuwan Kulasekara being ruled out of the series due to injury, Sri Lanka’s bolwing has been weakened. Thus, it would be crucial for Thisara Perera to step up and take over the mantle of leading the bowling attack, along with Lasith Malinga, who himself will have to improve on his efforts against India. Perera did have a great series with the ball against Pakistan, so he would be confident of doing well, but Nuwan Pradeep is yet to prove himself, and that would give India a chance to exploit Lanka’s disadvantages as well.