Doosra did all the difference for Harbhajan Singh

We all gave India no chance of winning the ICC World T20 this time around because the bowling was just too weak, didn’t we? The warm-up match against Pakistan gave us enough hints that Team India wasn’t going to be a huge force to win the tournament. And Afghanistan showed us how thin our bowling unit was.

We all gave India no chance of winning the ICC World T20 this time around because the bowling was just too weak, didn’t we? The warm-up match against Pakistan gave us enough hints that Team India wasn’t going to be a huge force to win the tournament. And Afghanistan showed us how thin our bowling unit was. Even Zaheer Khan showed us what a liability he has become in the team like a non-performing Sachin Tendulkar has of late. We were sure that India would only need lots of miracles to win their matches and not on solid bowling performances.

India just managed to defeat minnows Afghanistan which was mainly because of the inexperience of their players. The victory wasn't the result of any spectacular show of our Indian players. Of course, we can exclude R Ashwin from that as his brilliance did count in the end when he had the dangerous Mohammad Nabi (who reminded me of one of India’s nemesis for many years - Inzamam-ul-Haq) caught at a crucial point of the match. 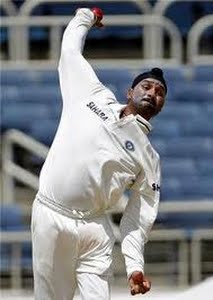 Now the match against England was no doubt inconsequential. Not many of us would have thought that India would defeat England considering their red hot pace battery. Dhoni made three changes with all the bowlers on the bench during the Afghanistan match getting tested out. Zaheer Khan was out of the match and so was the trump card R Ashwin! Now playing without Ashwin seemed to be a blunder but the result of the match proved to be something else.

Thanks to Irfan Pathan’s fabulous swing bowling, India was right there in the contest as England were on the backfoot early in their run chase. With England at 39 for 2 in 5 overs, Harbhajan Singh was introduced into the attack. I expected Bhajji to bowl the quicker and flatter balls to curtail the English batsmen. But he definitely had other ideas up his sleeve. The second ball of his first over, Harbhajan bowled the arm ball and Eoin Morgan who went back for a forcing square cut found his stumps rattled as he was clearly done in for pace and the lack of room.

Now Harbhajan’s tail was up as he got an early wicket in his spell. I do remember Ravi Shastri always on air used to say that Harbhajan is a completely different bowler whenever he takes a wicket early in his spell. That was clearly evident against England. However, that wasn’t the big reason behind his success. It’s something else! It’s a magic that he had unleashed! And that was shown in the first ball that he had bowled to Jonny Bairstow just after Morgan’s exit. It was a well tossed up delivery and Bairstow lunged forward to defend it around off. But what happened was that the ball had gone the ‘other way’ with lovely bounce as MS Dhoni appealed for a stumping. That was the DOOSRA!! It came out of nowhere from Bhajji’s hand! Harbhajan kept on mixing these doosras with the off breaks and arm balls and the English batsmen had no clue whatsoever which way the ball was heading towards after landing on the surface! Add to that, they had to face the guile of Piyush Chawla who was mixing the googlies with his jumping leg breaks.

The doosra helped Harbhajan Singh to claim extra ordinary figures of 4-2-12-4! And with Piyush Chawla joining the party, England were demolished for a paltry 80 all out in 14.4 overs. Oh and England who lost the match by 90 runs are the defending World T20 Champions as well! India’s confidence with this on a sky high and now they are serious contenders to win the tournament!

Now back to Harbhajan Singh, who deservingly lost a place in the side because of his lack of wicket taking abilities in the recent times. R Ashwin, who replaced him, has been turning the off break more than him and his carrom ball has been effective in all forms of the game. Harbhajan, the last time he was playing Test Cricket wasn’t even able to trouble the no. 11 batsman! The reason for that being that Harbhajan had no real variety in his bowling to keep the batsman guessing. When he started off his career, there were plenty of wickets he tumbled in a hurry. It was because of the doosra that helped him get so many wickets then.

The doosra was abandoned in the recent years by Harbhajan Singh after he was reported for suspect action to the ICC. Without the doosra, Harbhajan became any other off spinner, nothing real special about him. Meanwhile the last 3-4 years has seen the emergence of Saeed Ajmal who has become virtually unplayable for a majority of batsmen in the world. Not a match goes where Saeed Ajmal had gone wicketless or had been hit around all the park. Ajmal’s success is plainly because of his doosra which he bowls at will. It is very clear that he bends the elbow while bowling that delivery and yet gets away because of the stupid new ICC rules to accommodate such dubious actions. I think the same about Muttiah Muralitharan who also was benefited greatly by the new ICC rules on elbow flexion.

Any person who has played cricket would agree that a leg spinner (or any wrist spinner) can bowl his googly (the leggie’s doosra) by releasing the ball from back of the hand without bending the elbow. However an off spinner (or any finger spinner) cannot bowl the ‘back of the hand’ delivery without bending his elbow. Which means that the doosra cannot be bowled without bending the elbow. Bowlers like Ajantha Mendis, R Ashwin and Sunil Narine do not bowl the doosra but instead bowl the carrom ball which also goes the other way, but it is more of a flick to the ball which behaves like a leg cutter to the right handed batsmen.

While I can’t agree with the fairness of Harbhajan’s doosra but the thing is that when Saeed Ajmal is allowed to bowl this (‘chuck this’) doosra day in and day out, then why not for any other bowler? Either there should be strict rules or no rules instead of these selective liberties dished out to some of them like Saeed Ajmal.