England fought hard against the second new ball to finish Day 1 at 267 for 3 with opener Alastair Cook batting through with an unbeaten century. Cook is batting on 114* (from 283 balls with 11 fours and a six) and has got Ian Bell (10*) at the crease to stretch England towards a big first innings total.

Stumps on Day 1: England fought hard against the second new ball to finish Day 1 at 267 for 3 with opener Alastair Cook batting through with an unbeaten century. Cook is batting on 114* (from 283 balls with 11 fours and a six) and has got Ian Bell (10*) at the crease to stretch England towards a big first innings total.

South Africa had early success after Tea when Jonathan Trott (71 from 162 balls with 9 fours) was caught behind in an attempted drive on the up to a bouncy length ball from Morne Morkel. After a massive 2nd wicket stand of 170, Kevin Pietersen walked in with intent to push the scoring rate ahead with the solid Cook. Pietersen worked his way to 42 from 72 balls (with 4 fours) before he was caught down the legside off the glove in an attempted pull shot to a short ball from Kallis around the rib cage. 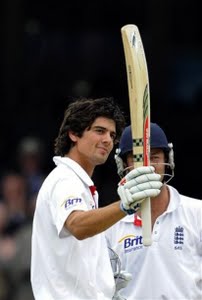 Pietersen added 81 runs with Cook to take England to 251 for 3 while falling just before the second new ball was taken. Alastair Cook and Ian Bell then saw through the remaining overs safely to defy the quality South African attack.

Tea on Day 1: South Africa went wicketless in the post lunch session as Alastair Cook and Jonathan Trott grinded their bowling attack with ease to take England to 158 for 1 in 53 overs by Tea. Cook has got to 68 from 169 balls with 7 fours and a six while Trott collected 68 from 153 balls with 9 fours. England’s only worry now seems to be the run rate which is 2.98 and ideally they would like to end the day’s play at a total of 270 atleast.

Lunch on Day 1: England looked steady at 70 for 1 in the 23 overs that were bowled in the morning session. Barring the first over of the Test Match in which Andrew Strauss got out, England looked in control as Cook and Trott batted with discipline under overcast conditions.

It was a disastrous start for England when Morne Morkel trapped Strauss lbw in the very first over of the Test Match. It was a nice length ball swinging into Strauss (0 from 4 balls) who fell across in a flick to get hit on the pad infront of middle. The Umpire initially gave it not out and a subsequent review taken by the Proteas reversed the decision in their favour.

After Strauss’ exit, it was all Alastair Cook (33* from 77 balls with 3 fours and a six) and Jonathan Trott (27* from 60 balls with 4 fours) seeing off the threat from Morkel, Philander and Steyn.

Toss and Teams: England have won the toss and elected to bat first in the 1st Test against South Africa at The Oval in London. The match is off to a 15-minute delayed start because of a passing shower prior to the toss.