Having gone down in the first T20 at Durban, New Zealand fought back, as they often do, to clinch the second T20 against South Africa at Centurion, and thus square the series

Having gone down in the first T20 at Durban, New Zealand fought back, as they often do, to clinch the second T20 against South Africa at Centurion, and thus square the series. The New Zealand triumph was led by a fantastic fifty from Martin Guptill at the top of the order, which enabled the Kiwis to put up an impressive score on the board. In response, South Africa could never really make any kind of impact with the bat. They kept losing wickets right from the start, and there was no recovery in store as well. New Zealand's bowlers exploited the conditions better to register a 32-run triumph. 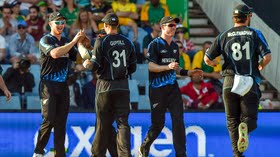 Batting first, the Kiwis got off to a terrific start courtesy Guptill and Kane Williamson, who added 50 in under six overs. The latter soon departed hitting Kagiso Rabada into the hands of deep third man. South Africa however missed a chance to put a squeeze on the Kiwi batting. Guptill was put down by David Miller when on 38. The opener went on to complete his half-century, slog-sweeping Eddie Leie to bring up his fifty. He was dismissed softly though as a full toss from Farhaan Behardien resulted in an easy catch of Guptill.

The dismissal of Guptill was followed by that of Grant Elliott, who was trapped plumb in front by Aaron Phangiso. But, if South Africa thought they could restrict the Kiwis from there, they were wrong. James Neesham and Colin Munro took the attack to the Proteas camp, and looted over 60 runs in the last seven overs. Neesham proved his utility in the format while Munro aided the visitors by slamming 18 runs off a Kyle Abbott over. While Rabada dismissed both the set batsmen off consecutive balls to finish with impressive figures again, Abbott went wicketless, and was taken for 11 runs an over, and Phangiso went at 10.

South Africa began the chase poorly, and never recovered. Morne Van Wyk was caught behind off Mitchell McClenaghan very early in the innings. The experienced duo of Hashim Amla and AB de Villiers both reached double figures, but there was no respite for the Proteas as the wickets kept falling. Amla departed giving a simple catch to point while de Villiers also fell going for a big shot. He could not find the boundary though and instead headed back into the pavilion.

At 47 for 3, South Africa were in big trouble. Rilee Rossouw and Behardein featured in a steadying stand, but it was not enough for South Africa to recover. They fell way short as wickets continue to tumble, McClenaghan standing out in his favoured format.