Kings XI Punjab opened their IPL 6 campaign with a thrashing win over Pune Warriors at the Subrata Roy Sahara Stadium. The victory was confirmed for Kings XI Punjab after the first half itself as the hosts could set them a small target of just 100 in 20 overs.

Kings XI Punjab opened their IPL 6 campaign with a thrashing win over Pune Warriors at the Subrata Roy Sahara Stadium. The victory was confirmed for Kings XI Punjab after the first half itself as the hosts could set them a small target of just 100 in 20 overs.

Kings XI Punjab Skipper Adam Gilchrist gave a breezy start scoring 15 from 10 balls which was followed up by an impressive innings of 43* (from 28 balls with 7 fours) by U-19 player Manan Vohra. Gilchrist’s opening partner Mandeep Singh scored a decent 26-ball 31. The visitors took just the 12.2 overs to knock off the target of 100. 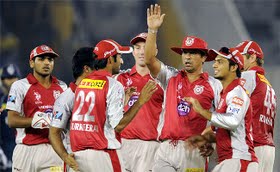 Although it was the bowlers who set up the easy win for Kings XI, it was Vohra who collected the Man of the Match award instead for his 43*.

Pune Warriors struggle to reach three figures: A superb bowling performance from a pace-dominated attack backed up by terrific fielding saw Kings XI Punjab restrict hosts Pune Warriors to a paltry 99 for 9 in 20 overs at the Subrata Roy Stadium. It wasn’t that the pitch wasn’t good for batting but it was the quality of the Kings XI bowlers that saw the Pune batsmen struggle to get going.

The first 10 overs produced only 38 runs at the loss of five wickets as the Kings XI bowlers got the ball to seam away and also kick up off the pitch. The lone spinner Piyush Chawla also did a fabulous job giving away only 16 off his 4 overs while taking the wicket of Uthappa. Aussie speedster Ryan Harris was outstanding for his 1 for 12 in 4 overs while the experienced Azhar Mahmood took 2 for 19 in 4 overs. Amongst the local talent, Parvinder Awana bowled a lovely spell of 4-0-16-1.

The highlight of the Pune Warriors’ innings was a breathtaking diving catch to his right by Gurukeerat Singh at long leg to what was a full blooded pull shot from Ross Taylor. The top scorer for Pune was Abhishek Nayar who made an unbeaten 25 from 26 balls.

Toss and Teams: Hosts Pune Warriors have won the toss and elected to bat first at the Subrata Roy Sahara Stadium against Kings XI Punjab who will be playing their first match of IPL 6. Pune will be missing the services of Yuvraj Singh who is out of the match with a back injury. The four overseas players for Pune are Mathews, Ross Taylor, Samuels and Mitchell Marsh. For Kings XI, the four overseas players are Gilchrist, Azhar Mahmood, Ryan Harris and David Hussey.