After winning the one-off T20 at Cardiff, England would now be keen to carry on the winning momentum in the one-dayers as well. Traditionally England has struggled against the Aussies in the 50-over format

After winning the one-off T20 at Cardiff, England would now be keen to carry on the winning momentum in the one-dayers as well. Traditionally England has struggled against the Aussies in the 50-over format, irrespective of whether they have played at home or away. However, that was also the case in the Ashes till a decade ago. England has since managed to reverse that trend, and will be keen to improve their record against the arch-rivals in the one-day format as well. Their victory in the T20 at Cardiff just a couple of days ago will give them added assurance about the same. A number of persona from that match will feature in the one-dayers. Australia, on the other hand, will want to build on their world champion status. 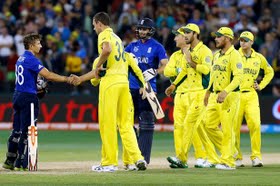 The first one-dayer to be played at the Ageas Bowl will give both sides an opportunity to get a glimpse of what the ODI future holds for them. England has already gotten some impressive signs against New Zealand, but they would undoubtedly be seeking more gains against the Aussies. Like in the Tests, their top order is shaky even in the one-day format. Alex Hales has done exceedingly well in T20s,> but somehow hasn't been able to translate potential into performance in ODIs. He will get another chance to prove his worth. There are also question marks over his batting partner. Jason Ray was picked for the job, but he was a big let down managing under 100 runs. The recalled Moeen Ali, who opened in the World Cup, might be handed back the spot.

The number three position also is open to debate. The spot is usually occupied by Joe Root, but with the Ashes hero getting a much deserved> break, Ray could be fit in at number three. Alternately, they could also ask James Taylor, who has proved his batting versatility, to move up the order. Without doubt, the in-form skipper Eoin Morgan would be key to England's success, as would be the performance of Ben Stokes who, on his day, can be a lethal match-winner with both bat and ball. Also, Jos Buttler may have had a forgettable Ashes, but he cannot be overlooked in the shorter formats. With James Anderson and Stuart Broad out of favour, the relatively young Steven Finn will find himself leading the attack. England will also have high hopes from leggie Adil Rashid.

Australia may be the world champions, but the loss in the T20 after being in a dominant position proves that they have issues of their own. Like England, Australia also has opening woes. With Aaron Finch out injured, Australia tried out Shane Watson at that slot in the Cardiff game, but the move did not work. Earlier, Joe Burns was handed a debut at that slot against Ireland, and he responded with a fifty. There is no reason why Australia shouldn't go back to him though England's bowlers will pose a greater challenge. David Warner, the other opener, will have to deliver if the Aussies want to win matches constantly. He failed at Cardiff, and Australia were immediately on the back foot.

In fact, if you take out captain Steven Smith and Glenn Maxwell's performance, there was nothing impressive about the Aussie batting at Cardiff. And, while the visitors would be pleased that their skipper is continuing to remain among the runs, they would look forward to better shot selection from Maxwell. He is experienced enough to understand so. Also, the lack of runs from Mitchell Marsh would worry them. With James Faulkner banned for drunkdriving> though, they do not have a lot of options left. Pat Cummins was impressive with the ball the other day. Left-arm pacer Mitchell Starc will be expected to lead the attack while Ashton Agar is most likely to get his ODI cap.