Toss: New Zealand have won the toss and will bowl first

Result: Match abandoned due to rain

Kevin Pietersen's England comeback was put on hold as rain caused the second T20 against New Zealand at The Oval to be abandoned after just two balls. As Pietersen prepared to return, it was announced that the man he replaced in the side, Eoin Morgan, will have surgery on a finger injury that will keep him out for several weeks.

The pitch, situated towards the south-west side of the square, was exceptionally quick and bouncy, with one short boundary that both teams targeted to good effect 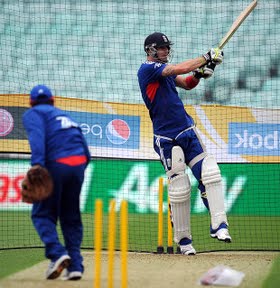 1.New Zealand's win was only their third over England in ten T20s - and their first in this country.

3.Hamish Rutherford's 62 at The Oval was his first international half-century since making 171 on Test debut in March.