Just like day one, there was no clear winner on day two of the India-Sri Lanka Test at the P Sara Oval as well. India added 74 runs to their overnight score of 319, before losing their last four wickets.

Just like day one, there was no clear winner on day two of the India-Sri Lanka Test at the P Sara Oval as well. India added 74 runs to their overnight score of 319, before losing their last four wickets. The Indian bowling then came up with a probing effort to make sure the Test remained evenly balanced. Opener Kaushal Silva hit a half-century for the hosts. But, he fell to Amit Mishra just as the team wanted him to carry on. Earlier, Lanka had also lost the other opener Dimuth Karunaratne cheaply before Kumar Sangakkara and Silva featured in the rescue act. The dismissals of both evened out things by close of play as Lanka finished on 140 for 3.

India began the second day of the second Test at the P Sara Oval just as they ended the opening day, on a poor note. The previous day, Rohit Sharma, after having batted with ease for most part of innings, was trapped lbw to what was to become the last ball of the day. Just two runs were added to India's overnight score of 319 for six when Ravichandran Ashwin chipped a drive uppishly, and gave his wicket away tamely. What was a healthy 319 for 5 at one stage on day one, had now become 321 for 7, and the Indian innings was not looking all that impressive. With India continuing with the five-bowler strategy, the pressure was on Wriddhiman Saha to deliver with the bat. 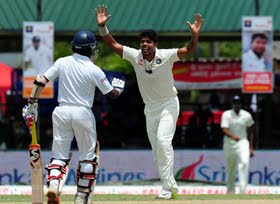 Angelo Mathews, who continued to keep things tight, was very well supported by Dhammika Prasad, who may not have had wickets to show, but he troubled the Indian batsmen nonetheless with his accuracy and pace. He was unlucky as well. One of his well directed deliveries to Saha hit the stumps, and the bails moved slightly, but only to fall back into place. Saha in the company of Amit Mishra enjoyed all the luck as the duo added some crucial. There was an edge behind the wicket off Saha, but the umpires ruled it not out as replays were inconclusive. Mishra continued to swipe, sweep, reverse sweep and somehow survive.

The partnership for the eighth wicket had somehow progressed to 46 when Mishra's luck finally ran out. He edged the pacy Dushmantha Chameera behind the wickets, falling for 24 from 50. At the other end, Saha went on to complete his half-century as India inched closer to 400. However, they could not get there as Rangana Herath finished off India quickly after lunch. He had Saha lbw for 56 in the first over as the batsman hid his bat behind his pad. The left-arm spinner gobbled up Ishant Sharma too to finish with four wickets. India would have been hoping to post 400 plus finished seven runs short. With a little more luck, Sri Lanka would have had India for under 350.

Umesh Yadav, who was making a comeback to Tests, got India off to a perfect start as he had Dimuth Karunaratne lbw with a perfectly pitched lbw, with his very first ball of the match. The on-field battle become redundant for some time as Kumar Sangakkara walked in, and was given what has become the now obligatory guard of honour. Yadav bowled a near-perfect yorker to him first ball, but Sangakkara managed to keep it out. It was business as usual for him after that as he placed the ball in the gaps, and found the odd boundary. Kaushal Silva enjoyed better luck as Stuart Binny induced an edge from him, but it didn't matter as the bowler had overstepped. The partnership was finally broken for 74 as Ashwin had Sangakkara caught by the safe hands of Ajinkya Rahane. But, the Lankan legend, in all probability, will get one final shot at glory.