Afghanistan and West Indies, two of the teams who have been knocked out of the World Cup 2019, will look to finishing their disappointing campaign on a high when taking on each other in match number 42 at Headingley in Leeds.

The Afghans have failed to win a single match so far, despite having the upper hand over both India and Pakistan. West Indies, on the other hand, began the series in sensational fashion with a brute of a win against Pakistan, but have failed to capitalise on the great start and have been on a losing spree since. 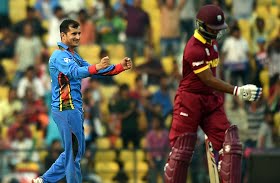 Like in the game against India, Afghanistan let Pakistan off the hook as well after having the match in their kitty for most part. Their inexperience in crunch situations proved to be their undoing again. Their spinners, surprisingly barring Rashid Khan, have done a very good job. Mohammad Nabi has been top class while Mujeeb ur Rahman was also brilliant in the game against Pakistan.

It is the batting that has really let Afghanistan down in this World Cup, and bowlers have had to constantly make up for it. The early loss of Mohammad Shahzad at the top of the other has been clearly felt, and but for a few 30s and 40s here and there, Afghanistan have nothing substantial to show.

Deep down, West Indies would know that they are a much better side than the solitary win they have to show for their efforts. In many games, they came tantalisingly close to victory but could not put the finishing touches. It happened against Australia, in rather heartbreaking fashion against New Zealand and then again in the most recent match against Sri Lanka.

It has been a case of individual brilliance over teamwork for the Windies, which has led to their undoing. Chris Gayle has shown glimpses of brilliance when much more was expected of him. Carlos Brathwaite has proved to be a one-match wonder while Sheldon Cottrell has been consistent with little or no support from the others. Nicholas Pooran though has been the find of the World Cup for West Indies and he will be keen to sign off on a high.