Having comfortably defeated Zimbabwe in the two T20 matches, Pakistan would now be keen to extend their domination in the one-dayers as well. Zimbabwe had visited Pakistan for a short series some months back,

Having comfortably defeated Zimbabwe in the two T20 matches, Pakistan would now be keen to extend their domination in the one-dayers as well. Zimbabwe had visited Pakistan for a short series some months back, and came back empty handed. Pakistan now have a chance to rub it in, and claim more glory against the opponents in the latter's home land. Zimbabwe on the other hand would have introspected on where they went wrong in the T20, and will like to set things right against Pakistan in the ODIs. Like against India in the previous series, they have had their chances against Pakistan as well, but have failed to capitalise on the same. 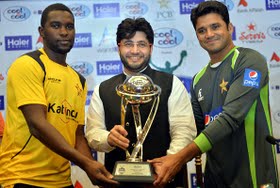 Pakistan may have won the T20 series, but they would be aware that they have work to do in the batting department. In both the matches, their batsmen scored 136, which will be a losing score in T20 in most games, against decent teams. But, they were bailed out by their bowlers both times. They were lucky in that sense. At the same time though, they would want their batsmen to stand up and deliver. Azhar Ali comes back in as the skipper, and he can lend solidity to the line-up. Mohammad Hafeez and Ahmed Shehzad will also have a role to play given their experience. Pakistan will also expect more out of Sohaib Maqsood.

In contrast to their batting, Pakistan would be extremely pleased with the way they bowled in the two games, and enabled a series win for the visitors. Imad Wasim stood out with his left-arm spin in the first game, totally bamboozling the Zimbabwe batsmen. Even the pacers did a good job overall. Wahab Riaz, Sohail Tanvir and Imran Khan kept the pressure on the Zimbabwe batsmen throughout. With Saeed Ajmal losing his way in the wake of his bowling action controversy, Pakistan would have been worried about the bowling unit. But, Yasir Shah has fit nicely into the scheme of things. Pakistan would be confident of their bowling

For Zimbabwe, it will definitely be about a significant improvement in their batting effort. Had they managed to bat decently, the result of the T20s could have been different. Even after the departure of Brendan Taylor, they have plenty of talented batsmen, who are also reasonably experienced. The list is a reasonably big one, with the likes of Elton Chigumbura and Hamilton Masakadza, who have been around for years now. The two big hitters Craig Ervine and Sean Williams are also reasonably experienced, and possess the ability to turn around matches singlehandedly. Among the younger lot, Sikandar Raza and Chamu Chibhabha are bright talents

If at all Zimbabwe managed to compete in the T20s, it was thanks to their bowlers. Chibhabha was brilliant at the top of the innings with his accuracy in the previous game. Most of the other pacers also supported him well. Prosper Utseya has had issues with his actions, but has done reasonably well by working around the same. In Graeme Cremer, they have a reasonably talented legspinner, who is accurate as well. But, the task would be tougher for them in ODIs as the bowlers would have to maintain pressure for longer periods. This is why Zimbabwe will need their batsmen to stand up.