South Africa defeated India 3-2 in the recently concluded one-day series. Here’s a look at some of the best performers from the series, not surprisingly, most of them being from South Africa

South Africa defeated India 3-2 in the recently concluded one-day series. Here’s a look at some of the best performers from the series, not surprisingly, most of them being from South Africa.

AB de Villiers: The South African captain led from the front, with 358 runs from five games at an average touching 90. He smashed three hundreds in the series at a strike rate of 134.5. De Villiers began the series with an unbeaten 104 in the win at Kanpur, and after two failures, followed it up with 112 in the losing cause at Chennai, before 119 in no time in the decider at Mumbai to take the Proteas past 400. South Africa could not have asked for more from their skipper. 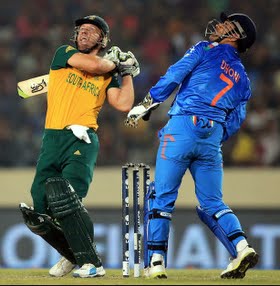 Faf du Plessis: Like de Villiers, Faf was also consistency personified in the series. He ended as the second highest run-scorer with 323 runs at an average of 80.75 with three fifties and a hundred, and a strike rate of 93.6. He registered scores of 62, 51 and 60 in the first three games, and ended the series by smashing 133 from 115 balls, before retiring hurt. Impressive returns indeed.

Quinton de Kock: He had a horror World Cup, and briefly even lost his place in the national side. But, de Kock just loves the Indian attack, and his favourite side put him back among the runs. De Kock ended the series with 318 runs averaging 63.30 with two hundreds at a strike rate of 103. Five of his eight ODI hundreds in 62 matches have been registered against India. That says a lot.

Rohit Sharma: He was the only one of two Indian batsmen to have crossed the hundred mark in the series. Sharma had a mixed series, finishing with 255 runs averaging over 50 with one hundred and one fifty at a strike rate of a shade under 100. Sharma made 150 at Kanpur and 65 at Rajkot. Unfortunately, both came in losing causes. Still needs to work on his consistency.

Kagiso Rabada: The left-arm seamer had a memorable series, finishing with 10 wickets at an average of 24, a strike rate of 28 and an economy rate of 5.1. He claimed 3 for 54 at Chennai and finished with 4 for 41 at Mumbai. What the stats don’t show is that he constantly kept the likes of MS Dhoni and Virat Kohli under check, not allowing them to get the big strokes. One for the future definitely.

Dale Steyn: The speedster wasn’t at his best, yet finished with 10 scalps at an average of 26.7, a strike rate of 28 and an economy rate of 5.7. He claimed three wickets in an innings thrice during the series – at Indore, Chennai and Mumbai. Not a good sign for India with the Tests approaching.

Morne Morkel: Though he missed the last two games, Morkel still made an impact with seven wickets at an average of 18.8, a strike rate of 25.7 and an economy rate of 4.4. His most significant contribution came in the Rajkot ODI where he stifled India with figures of 4/39.