Rajasthan will take on Bangalore in match number 49 of the Indian Premier League 2019 at the M Chinnaswamy Stadium in Bangalore. While Rajasthan's hopes

Rajasthan will take on Bangalore in match number 49 of the Indian Premier League 2019 at the M Chinnaswamy Stadium in Bangalore. While Rajasthan's hopes of play-offs qualification hang by a thread, Bangalore has already been knocked out of Indian T20 following their loss to Delhi.

Rajasthan can qualify if they win both their remaining matches of if they win one and the rest of the results conspire to push them through. Rajasthan will be missing a lot of key players. Jofra Archer and Ben Stokes are back in England. More significantly, they don't even have Jos Buttler as well, who was leading Rajasthan's charge with the bat, with 311 runs.

While the mid-season sacking of Ajinkya Rahane as skipper was shocking, it did inspire him to roar back to form with a hundred even though in a losing cause against Delhi . Rajasthan would be pleased with the efforts of rookie Riyan Parag, whose stunning cameo against Kolkata was really impressive. They, however, have failed to grab the big moments in a number of games, which they cannot afford anymore. 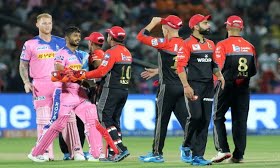 The last time Rajasthan and Bangalore met, Shreyas Gopal, deceived big names like Virat Kohli, AB de Villiers as well as Shimron Hetmyer. Since he has been rather impressive. While Bangalore have nothing much to lose, Kohli and co would be keen to make a mark.

Bangalore has done well in recent times but they could not deliver against Delhi, which led to them being knocked out. Kohli is someone who plays every game with pride and passion. So even though qualification may be out of the question, he would want Bangalore to sign off on a high and play spoiler to other teams.