Under-19 Champs: 5 players to watch out for

The euphoria of India’s magnificent win in the U-19 World Cup final against Australia on Sunday at Townsville is slowly begin to die down. This makes it a perfect time to reflect on India’s performance in the tournament...

The euphoria of India’s magnificent win in the U-19 World Cup final against Australia on Sunday at Townsville is slowly begin to die down. This makes it a perfect time to reflect on India’s performance in the tournament, and the players to watch out for. Here’s our list of five budding cricketers, who could find themselves in the national side in the near future.

Unmukt Chand: The first and foremost name that springs to mind is of course the team’s skipper Chand. What an innings he played under pressure in the final, giving further proof of the fact that apart from being talented, he is also a big match player. Comparisons have already begun between him and Virat Kohli, who led India to the U-19 World Cup title in 2008. A stylish batsman, Chand has ability to shift gears, and either defend or attack, depending on the situation of the match, as evident on the big Sunday. Like M S Dhoni in last year’s World Cup, Chand had a quiet tournament leading into the final, but stood up and delivered when it mattered the most. 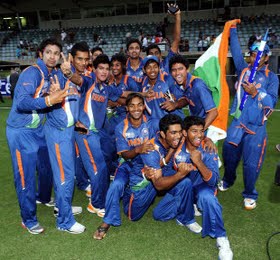 Baba Aparajith: A qualityall-round performer, Aparajith chipped in with handy performances with bat and ball in almost every game for India. At the pivotal number three position, Aparajith held the innings together whenever they have looked in a spot of bother. With the ball, he was economical throughout, and picked up quite a few catches as well throughout the tournament. In the final too, he delivered under pressure, with figures of 1 for 31 with the ball, and a significant 33 with the bat, that kept India very much in the chase.

Prashant Chopra: Although the opener failed in the final, he was the one Indian batsman who maintained some sort of consistency right through the tournament. It were his runs that helped India build decent totals despite the others not contributing much. A quality opener in the making, Chopra could have a bright future provided he works hard and is guided in the proper direction.

Harmeet Singh: Legendary Australian Ian Chappell believes that Harmeet Singh is much better than Harbhajan Singh and Ravichandran Ashwin, and is ready for international cricket. And while Chappell’s observation may be subjective, it is a fact that everyone who saw the spinner in action was impressed by his ability to tempt the batsmen out of the crease. Singh played a key role in helping India defend chaseable targets throughout the tournament, and also kept a cool head with the bat when the going got tough against Pakistan. While he was economical in most games, Harmeet kept up the good work in the final as well. He did not pick up a wicket, but conceded only 36 runs.

Sandeep Sharma: From start to end, it was the right-arm fast bowler who got the crucial early breakthroughs for India. In the final too, Sharma grabbed four wickets, which helped India keep Australia down to a reasonable total. It was in the game against Pakistan though that he was at his best. He got two wickets in his first over, and then featured in the winning partnership with Harmeet. Sharma’s calmness under pressure throughout the tournament was amazing.