This is the best series we have won, says elated Kohli after Mumbai triumph

Indian skipper Virat Kohli described the Test series win against England as the best they have won under his captaincy thus far. India got the better of England by an innings and 36 runs at Mumbai on Monday. India have recently won series' against South Africa, Sri Lanka, West Indies and New Zealand.

Indian skipper Virat Kohli described the Test series win against England as the best they have won under his captaincy thus far. India got the better of England by an innings and 36 runs at Mumbai on Monday. India have recently won series' against South Africa, Sri Lanka, West Indies and New Zealand. But, at the post match conference, Kohli candidly admitted, “Out of the five series that we’ve won, this is the best by far, because of the quality of the opposition, and the kind of cricket that we’ve played. We’re very proud of that, and for me as a captain, this is definitely on top."

Kohli who has so far amassed 640 runs in the series, with his career best of 235 coming at Mumbai, stated that things weren't easy against England, an opposition that had beaten them in the previous three Test series' between the two teams. “I don’t think it’s been easy. We have been put under pressure many times. I think I would give my team a lot of credit for bouncing back from those tough situations. We haven’t got anything on the platter. We have had to work hard for it. And it’s been a result of constant pressure that we have forced the opposition to make mistakes.

With the bat as well we have shown really good character to come back into the game, showing enough patience, more than the opposition, so I would credit my team than calling it an easy series. No series win is easy, especially not this one," Kohli was quoted as saying in a PTI report.

Kohli was gracious enough to admit the role played by batting genius Sachin Tendulkar in his batting renaissance. “The best advice was not to read and look up things that are written about me. I am not joking or being sarcastic, and that was the best advice I have gotten. That was one thing that kept pulling me back as far as Test cricket was concerned."

"I don’t know somehow people enjoyed calling me not a good Test player and it inspired me further to do extra well in this format. Being captain I took my mind more off those things because I didn’t have to read up or hear what people had to say about me. It was all about thinking what the team has to do and that has helped me immensely to stay focused on what I have to do on the field, " the Indian skipper explained.

On the other hand, England skipper Alastair Cook put down the loss to missed chances and limited spin resources. "It was a game of missed opportunities again. 400 on that wicket was a good score. 230 for two we had an opportunity to go a bit bigger than that, but I thought 400 in those conditions was good and just above par. Then at 300/6 and 360/7 we had opportunities," Cook lamented at the post-match interaction. 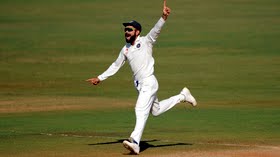 "We missed three good chances to take wickets and they made us pay. That is credit to India. Most teams who score runs give chances at some stage and it is about a side being good enough to take them. Missing Kohli, missing Vijay and Yadav cost us dearly," he added.

Cook also admitted that England missed the likes of Graeme Swann and Monty Panesar, who starred in the 2012 victory in India. "No disrespect to Mo (Moeen Ali) and Rash (Adil Rashid), but Graeme Swann and Monty Panesar were world class bowlers in 2012. In these conditions you need that. Mo and Rash have bowled well but they are not yet in that league of Swann and Panesar. That is why we need a slightly different balance to the side. In 2012 we could play four bowlers, two seamers and two spinners, but in this side we need more options," he stated.