Pakistan grabbed the honours on Day 1 of the 1st Test against the Proteas at the Sheikh Zayed Stadium in Abu Dhabi. Hashim Amla scored a 20th Test hundred but Pakistan remained on top restricting South Africa to 245 for 8.

Pakistan grabbed the honours on Day 1 of the 1st Test against the Proteas at the Sheikh Zayed Stadium in Abu Dhabi. Hashim Amla scored a 20th Test hundred but Pakistan remained on top restricting South Africa to 245 for 8. The 30-year-old Amla is still at the crease batting on 118 (from 250 balls with 13 fours) with no.10 and 11 to support him in stretching SA’s total further.

It wasn’t a bad decision to bat first for the Proteas as the ball took turn on the first day itself. Debutant left-arm spinner Zulfiqar Babar, a first-class veteran, made best use of his opportunity to capture three wickets. The Proteas were in early trouble losing Alviro Petersen fending off a short ball from giant fast bowler Mohammad Irfan to short leg in the 3rd over. Skipper Graeme Smith making his comeback after an injury lasted only 16 balls to score 15 before he was caught behind off Irfan. 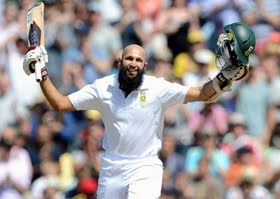 By Lunch time, SA lost Jacques Kallis as well, caught behind off an inside edge to Junaid Khan for 5. South Africa at 43 for 3 were steadied before and after lunch by a patient partnership between Hashim Amla and Skipper AB de Villiers. But about an hour in the second session, AB de Villiers (19) was dismissed through a bizarre run out. De Villiers was out of his crease casually when he had got an inside edge towards slip completely unaware that the ball was in play. Younis Khan along with Adnan Akmal was alert to notice De Villiers’ mistake to cash in on a run out.

Pakistan’s plans of running through the SA line-up were prevented by another fighting partnership this time from Duminy and Amla. The fifth wicket stand added 95 runs before a well set Duminy (57 from 94 balls with 6 fours and a six) was caught paddle sweeping Zulfiqar Babar to backward squareleg.

Babar struck twice after removing Duminy to have SA in deep trouble at 217 for 7. First he had Faf du Plessis edging a backfoot drive to slip and then got Robin Peterson bowled through the gate with an inside edge. Late in the day’s play, Saeed Ajmal managed to take his first wicket trapping Vernon Philander lbw.