Form teams Royal Challengers Bangalore (RCB) and Delhi Capitals (DC) will clash in match number 19 of IPL 2020 at the Dubai International Stadium on Monday. Both Bangalore and Delhi will go into the contest on a high having registered three wins in four games. While RCB got the better of Rajasthan Royals by eight wickets in their last outing, Delhi overcame the Kolkata challenge with a clinical performance.

The biggest plus for RCB from their previous game was undoubtedly the return to form of their skipper and key batsman Virat Kohli. With a middling total to chase, Kohli eased his way to a sublime 72 not out from 53 balls, a knock that could spell trouble for opposition bowlers. Apart from Kohli, RCB would be extremely pleased to see opener Devdutt Padikkal continuing to impress as he crossed another fifty versus the Royals.

In the bowling, it was the Yuzvendra Chahal show again as the leg-spinner set up the victory with another brilliant bowling performance of 3 for 24. Washington Sundar and Navdeep Saini have been doing their job. But, RCB would want more out of Isuru Udana and Adam Zampa. 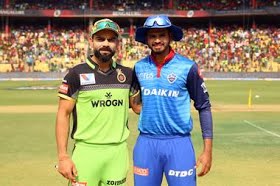 Delhi too have a lot to be happy about. They were all over KKR bowlers in the previous game, posting an imposing 228 for 4. Yet again, Prithvi Shaw got the team off to the desired start with a fluent fifty while skipper Shreyas Iyer provided the fireworks with a smashing 88 not out from 38 balls. Rishabh Pant played exactly the cameo that was needed for the team. The time though has come for Shikhar Dhawan and Shimron Hetmyer to lift their game.

Despite the victory against KKR, bowling remains a worry for Delhi. Anrich Nortje produced brilliant figures of 2 for 33. Kagiso Rabada went for a few, but that shouldn't be a worry. Marcus Stoinis has been too expensive as the fifth bowler and Ravichandran Ashwin has only just returned from injury. The injury woes continue for DC as Shaw and Amit Mishra’s fitness for Monday’s game is uncertain.

Head-to-Head Record: RCB have won 14 out of 23 matches against DC while the latter have been victorious in 8. One game produced no result.

It is a tricky surface at Dubai, which gets slow as the game progresses. Spinners do come into play. CSK though chased down 179 against KXIP without losing a wicket!

The temperature will be in the mid-30s. The heat will be on, quite literally.