Rohit Sharma overcame a slow start on a difficult to help India reach a competitive 166 for 6 in their 20 overs. He ended up smashing 83 in merely 55 balls with seven fours and three sixes, and featured in consecutive half-century partnerships with Yuvraj Singh (16) and Hardik Pandya (31)

Rohit Sharma overcame a slow start on a difficult surface to help India reach a competitive 166 for 6 in their 20 overs in the first match of the Asia Cup against Bangladesh at Dhaka. He ended up smashing 83 in merely 55 balls with seven fours and three sixes, and featured in consecutive half-century partnerships with Yuvraj Singh (16) and Hardik Pandya (31). In response, Bangladesh were never in the hunt as they lost wickets regularly, and fell short by 45 runs -- a rather sizeable margin by T20 standards. The openers fell within the first four overs, and Sabbir Rahman’s 44 was the only score of note as Bangladesh stumbled under pressure. This was after Mashrafe Mortaza had won the toss, and invited India to bat, earlier in the day.

In a match where most batsmen struggled, Rohit stood out. And, it was his rollicking partnership of 61 with Pandya that proved to be the big difference at the end of the day. India really rocketed away in the last few overs, overcoming a bad start in which Shikhar Dhawan, Virat Kohli and Suresh Raina, all fell cheaply, unable to gauge the slow conditions. While Dhawan and Raina were clean upped, Kohli miscued an uppish straight into the hands of the fielder. At the end of 10 overs, India were struggling at 52 for 3, with Rohit only having made 21 from 25. 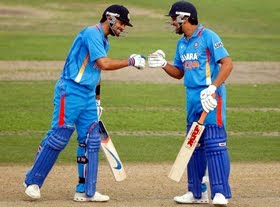 But, the 11th over by Taskin Ahmed shifted the momentum India’s way. After Shakib Al Hasan dropped him at point, Rohit placed one between point and third man for four, followed it up with an upper cut for six, and finished off the over with a glance that went through third-man’s legs into the boundary. He was to reach his fifty soon after. Rohit was the dominant partner in the alliance with Yuvraj, whose first big hit, off Shakib Al Hasan only went as far as deep midwicket. Yuvraj’s wicket, however, turned out to be a blessing in disguise for India.

Dhoni promoted Pandya, and the two ran amok. In over number 16, Rohit smashed Mashrafe Mortaza over long off for a maximum, and pulled and drove the bowler for four in the next two deliveries. Pandya joined in the act when he smashed Mustafizur Rahman for six over the midwicket boundary. This was after Rohit had flicked one over the ropes earlier. 21 runs came off that Rahman over, and a few more big hits were to follow as India finished off on a real high, with MS Dhoni’s last-ball six, pulling Al-Amin Hossain into the midwicket boundary, being the icing on the cake.

Bangladesh’s start was as poor as bright India’s finish was. In his second over, Ashish Nehra swung one back into Mohammad Mithun, and pegged back his off-stump. In the next over, Jasprit Bumrah had Soumya Sarkar caught behind off a short ball. Imrul Kayes struggled for his 14, before top-edging Ravichandran Ashwin to fine leg. Sabbir gave Bangladesh faint hope smashing Pandya and Ashwin over the ropes at cow corner in consecutive overs. A mix up though saw Shakib being run out, and Sabbir too eventually fell, top edging Pandya to Dhoni. With him went Bangladesh hopes of victory, if at all they had any.