Going into Lord’s, South Africa had everything going for them. They were 1-0 up in the series, their top four batsmen were in exceptional form – Graeme Smith, Alviro Petersen, Jacques Kallis and Hashim Alma had all scored hundreds at different points during the first two matches.

Going into Lord’s, South Africa had everything going for them. They were 1-0 up in the series, their top four batsmen were in exceptional form – Graeme Smith, Alviro Petersen, Jacques Kallis and Hashim Alma had all scored hundreds at different points during the first two matches. Furthermore, their opponents England seemed down and out. All the talk was surrounding Kevin Pietersen’s battle with the ECB and, possibly, also with some of the English players. In such a scenario, England were always expected to be the team on the back foot heading into the Lord’s Test.

Just a day into the Test however the entire scenario has changed, and England cricket was in the news again for the right reasons. South Africa’s in-form top four fell to an English seam attack that performed as if it had a point to prove. The ball was swinging no doubt, but the Proteas are used to countering such situations. England made a smart move by getting back Steven Finn in place of Tim Bresnan, and the decision could well prove to the one that clinches the deal for England. In a matter of one session, Finn had the South Africans hobbling claiming three of the four wickets to fall with his accuracy and nagging bowling. 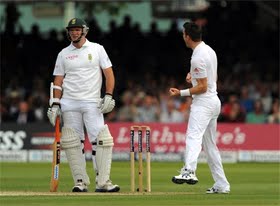 South Africa have every reason to feel aggrieved over controversial decisions of Kallis and Petersen, both of whom were clearly not as per the rules of the game, but were still asked to take the long walk back to the pavilion (one only hopes the controversy doesn’t overshadow the Test, just like the KP fiasco had threatened). Having said, that South Africa haveonly themselves to blame for putting themselves in a precarious situation at the end of the opening day’s play.

To be fair to the visitors, the conditions were tough but not unplayable, which also justifies Smith’s decision to bat first. But South Africa’s batting effort wasn’t up to the mark, surprising since they weren’t under any kind of pressure going into the Test. Or were they? On numerous occasions in the past, South Africans have put themselves under pressure by being overtly conscious of the big occasion. What the visitors ideally needed on the opening day was one batsman to bat through the day and get to a hundred, a norm when a team has a good opening day in a Test match.

What South Africa instead got was fidgety pokes, which only caused their downfall. Even leaving apart the top four, the latter batsmen who got in disappointed. A B de Villiers headed back after crossing the 20-mark while Jacques Rudolph, for whom this was a crucial knock, undid all the hard work after getting a start. J P Duminy, it was, who rescued his side from further embarrassment, but even he betrayed the side, playing a poor stroke at a time when his team needed him to bat through the day. But for Vernon Philander’s resistance, South Africa could have been bowled out on the opening day itself.

It’s too early to question whether South Africa have choked again, but they’ll need to do exceptionally well to pull off a win from this situation.