Ever since a British journalist Ed Hawkins raised suspicion over the authenticity of the India-Pakistan 2011 World Cup semi-final, there have been two extreme reactions.

Ever since a British journalist Ed Hawkins raised suspicion over the authenticity of the India-Pakistan 2011 World Cup semi-final, there have been two extreme reactions. While the BCCI, the ICC and even some cricketers who were part of that game have dismissed the allegations as rubbish, none other than former PCB Chairman Ijaz Butt has claimed that he believes the result of game was predetermined. And while Butt’s statement isn’t enough to conclude that there was something eerie about the big game, him wanting an enquiry into the match should be taken seriously.

In hindsight of the allegations, it is important to establish the credentials of the game. If the BCCI, the ICC as well as the PCB are cent per cent sure that there wasn’t anything iffy about the match, they shouldn’t have any hesitation about probing the same. They cannot hide under the guise that every allegation pertaining to match-fixing cannot be investigated. The India-Pakistan match wasn’t any other clash. For millions of fans from India and Pakistan, it was THE match of the 2011 World Cup. As such they would be heartbroken if they find out that the game wasn’t played in the true spirit. But, they have every right to know the truth, for they had invested a lot of emotions into that one game. 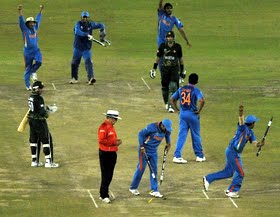 The reason why an investigation is necessitated is because claims by the British journalist are uncomfortably close to how the game eventually panned out. As per a bookie update which Hawkins received India would score around 260 batting first, Pakistan would then cruise to 100, then lose five wickets by 150 and go on to lose by more than 20 runs. As things panned out, India made exactly 260, Pakistan reached 103 for 2 before losing their way, crumbled to 142 for 5, and went on to lose the match by 29 runs. These things aren’t enough to imply that the game was fixed, but should be enough to hold a probe. So many coincidences?

Even as an ordinary fan, what further raises suspicion over the game is so much else about the match looked out of place. Sachin Tendulkar was dropped as many as four times. May be, just may be, one can put it down to nerves. At the same time, can you ever recollect a batsman being dropped so many times in a Test match, leave alone an ODI? The wicket-keeper’s glovework was so shoddy that he had to be dropped after the game. Even when Pakistan batted, they were so slow that they gave themselves no chance in spite of having a few wickets in hand.

When the News of the World spot-fixingsting first hit the headlines, the PCB weren’t ready to accept the charges. It was only after the allegations were proved that they had to face embarrassment. We are in no way concluding that the India-Pak semi-final was fixed. At the same time, there are too many things about the game that seem to be fishy, and call for an investigation, if only to prove that the result of the match was authentic.