Match behind closed doors felt like a warm-up: Ross Taylor

The last international cricket match before the game took a break due to Coronavirus was played behind closed doors -- Australia vs New Zealand at the SCG. When the game resumes, it is highly likely that for a few months matches will be played indoors. However, former New Zealand captain Ross Taylor recently conceded that the match played in front of an empty stadium felt more like a warm-up game than a proper international fixture. The game was played on March 15 after which subsequent cricketing activities have been put on hold.

"It was quite strange leading into the game. There were lots of whispers about the game being cancelled and everything happened very quickly. In the context of the match, turning up the preparation felt a bit strange. To me it felt like a warm-up game, didn't feel like a true international match but I guess once you get into it it's no different to if you are playing a competitive game of backyard cricket or a club game, you give it your all,” Taylor was quoted as saying in an ESPNCricinfo report. 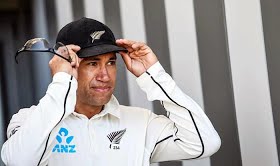 He further admitted, "But I'm not going to lie, it did feel very strange. At the same time there could be a few games like that so I'm sure as players we'll have to adjust to that and get used to it."

On the other hand, New Zealand captain Kane Williamson opined that the standard of the match did not suffer a lot, and the players, as expected, were at their professional best. He explained that players will have to be ready to play under similar circumstances when the game resumes. “Cricket can definitely be played at a high level. The guys were all professional in how they went about their business,” stated Williamson in the ESPNCricinfo report.

“It is odd, though, and creating your own atmosphere, I don't think you can ever quite create what a full house might do when there's simply no one there and all you hear is the crack off a cricket bat. You have to adapt and that may well be something players will have to get their head around to allow them to be back on the park,” the Kiwi skipper did admit.

The spread of COVID-19 has led to the indefinite postponement of the IPL. Also, there are question marks hanging over the 2020 T20 World Cup scheduled to be held in Australia in October-November.