The Oval Test which was expected to be fizzling out towards a high scoring draw came to life out of nowhere in the final session of Day 4 with the hosts England having their backs to the wall! Infact, England are staring at defeat on the final day having slipped to a miserable 102 for 4 in 38 overs!

The Oval Test which was expected to be fizzling out towards a high scoring draw came to life out of nowhere in the final session of Day 4 with the hosts England having their backs to the wall! Infact, England are staring at defeat on the final day having slipped to a miserable 102 for 4 in 38 overs! The cream of the English batting is back in the pavilion already.

It was like the fourth day’s play was being played on two surfaces – one a flat and placid one for the overnight batting pair of Hashim Amla-Jacques Kallis and the other a vicious one to bat on for the English team. Leg Spinner Imran Tahir was simply deadly on the dry surface although he picked just the one wicket, his jumping deliveries are going to be too much for the hosts on the final day tomorrow. 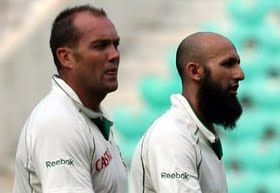 The morning started with Hashim Amla on 183* and Jacques Kallis on 82* in the pursuit of stretching South Africa’s first innings lead. The visitors batted on and on without losing any wickets at all and in the process seeing Hashim Amla to become the first ever South African to score a triple century in Test Cricket! The Proteas declared their first innings during the Tea Break at a massive total of 637 for 2. Graeme Smith settled with a lead of 252 runs while leaving England a full session to negotiate before stumps. Hashim Amla accumulated 311* (from 529 balls with 35 fours) and Jacques Kallis got 182* (from 326 balls with 23 fours and a six) which was his 43rd Test century. The Amla-Kallis pair had put on a marathon partnership of 377 for the unbroken 3rd wicket.

England then felt the fatigue of fielding for 189 overs as the top order batsmen got out without any fight! In just the 2nd over, first innings centurion Alastair Cook (0) got out edging a terrific away swinger from Vernon Philander to the keeper. Dale Steyn provided the second breakthrough which came in the 11th over when Jonathan Trott (10) on the backfoot edged his away swinger to the Keeper as well.

In the 18th over, Morne Morkel went through the backfoot defence of Kevin Pietersen (16) who got clean bowled after playing inside the line. Finally, Andrew Strauss (27 from 80 balls with 2 fours) also vanished as he tamely top edged a sweep off Imran Tahir into the hands of backward squareleg. Strauss was mentally done in by Imran Tahir’s leg breaks and googlies which turned and kicked wickedly.

By the close of play, Ian Bell (14* from 70 balls) managed to survive alongside a shaky Ravi Bopara (15*) with England still needing 150 more runs to make South Africa bat again.