Nathan Lyon claimed his 3rd five-wicket haul to help Australia stay in the contest in the Fourth and Final Test at the Feroz Shah Kotla. India was restricted to 266 for 8 despite a strong opening stand of 108.

Nathan Lyon claimed his 3rd five-wicket haul to help Australia stay in the contest in the Fourth and Final Test at the Feroz Shah Kotla. India was restricted to 266 for 8 despite a strong opening stand of 108. The hosts will consider themselves lucky to have atleast gone past Australia’s first innings total of 261 and have the slight edge over the tourists.

In a dramatic final session, India lost six wickets while adding up 131 runs in 30.1 overs. Peter Siddle came up with the first breakthrough by forcing a well set Murali Vijay (57 from 123 balls with 8 fours) to blindly fend off a nasty bouncer to the keeper off the glove. Debutant Ajinkya Rahane, who walked in at no.5 lasted only 19 balls for his 7 before he tamely gloved a jumping off break from Lyon to leg slip. India got into further trouble when the veteran Sachin Tendulkar (32 from 53 balls with 5 fours) went deep back in the crease and was hit on the pad infront of middle by a sharp turning off break from Lyon which skidded through low. Tendulkar’s exit left India at 180 for 5. 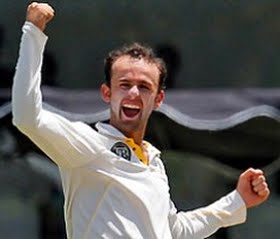 Sensing that quick runs were the need of the hour, India Captain MS Dhoni looked to launch a counter attack but ended up with a 23-ball 24 cameo after patting a pull shot off Pattinson to short mid wicket. At 210 for 6, India was in the serious danger of conceding a crucial first innings lead but a determined Ravindra Jadeja with the solid R Ashwin got through a fighting 44-run partnership. Jadeja scored a career best of 43 from 49 balls with 6 fours before he was given out lbw padding up to an arm ball from Glenn Maxwell.

At the stroke of stumps, Nathan Lyon returned back for a new spell and got R Ashwin (12 from 41 balls) lbw in the similar manner he had got Tendulkar earlier in the afternoon. India would be hoping the capable Bhuvneshwar Kumar to eke out some runs tomorrow morning along with the last two tail-enders. Nathan Lyon bowled his heart out for Australia and was rewarded with figures of 22.1-3-94-5.

Update at Tea: India are sitting pretty at 135 for 2 in 38 overs by Tea on Day 2. The Aussies did fightback in the post lunch session with Nathan Lyon taking the wickets of Cheteshwar Pujara and Virat Kohli in the space of two overs or so.

After putting up a wonderful opening stand of 108 in 25.1 overs, Cheteshwar Pujara got dismissed, clean bowled by a straighter one from Nathan Lyon which beat his frontfoot defence played wrongly around middle. Pujara scored a positive 52 from 76 balls with 5 fours. Next man, Virat Kohli (1) was trapped lbw by a flatter delivery angling away but turning in sharply with low bounce from round the sticks by Lyon. Murali Vijay (54*) and Sachin Tendulkar (12*) saw through the session safely after Lyon’s double blow. Tendulkar was lucky to survive a close lbw call when he missed a sweep off Nathan Lyon.

Update at Lunch: A solid opening stand between Murali Vijay and Cheteshwar Pujara has denied the Aussies an opportunity to come back in the Delhi Test. India thanks to the positive start got to 59 for no loss in 14 overs while cutting down the deficit to 203 runs. The Aussies with not much to defend are struggling to keep fielders in the catching position. Quite a few genuine edges from the Indian batsmen haven’t carried to the slips and resulted in useful boundaries.

Vijay is batting nicely on 23* from 42 balls while Pujara is on 28* from 42 balls. Interestingly, India opted to open with Pujara instead of Rahane. Virat Kohli is expected to come in at no.3 while Rahane seems to be held back at no.5.

Aus bowled out: India took about 45 minutes this morning to take the remaining two Australian wickets. The visitors could add 31 valuable runs in 14.1 overs before they were bowled out for 262.

R Ashwin provided the much needed breakthrough when he bowled a well tossed up delivery which went straight on to hit the off stump of Peter Siddle who played along the wrong line in a frontfoot deefence, expecting the ball to turn in. Siddle by then had scored his maiden Test fifty and got out for 51 (from 136 balls with 4 fours). He put on a crucial stand of 54 with Pattinson for the 9th wicket. R Ashwin got his 9th five-wicket haul by removing Siddle.

The last wicket to fall was that of James Pattinson (30 from 91 balls) who tried to flick one to mid wicket but it was a cleverly disguised arm ball from Pragyan Ojha which was angling across to take a leading edge to slip. Ojha with that finally could claim his 100th Test wicket.

Build Up to Day 2: India are already on top in this Fourth Test after nearly bowling out the Aussies on the opening day for a modest total. However, the Aussie tail wagged and they are still a couple of wickets to be taken for India. Australia will resume play at 231 for 8 with Peter Siddle inching towards a maiden Test fifty.