Gulbadin Nabi played a sensational inning to not only help Afghanistan comeback in the series but also win the series 3-2 against Zimbabwe and also ensured that their team will broke up in top 10 teams in the ODI rankings.

Afghanistan 254 for 8 (Naib 82*, Shahidi 31, Jongwe 3-50) beat Zimbabwe 248 (Masakadza 110, Moor 42, Hamza 3-41) by two wickets
Gulbadin Nabi played a sensational inning to not only help Afghanistan comeback in the series but also win the series 3-2 against Zimbabwe and also ensured that their team will broke up in top 10 teams in the ODI rankings. Nabi guided Afghanistan to 249 target with two balls and two wickets to spare. His inning’s overshadowed Hamilton Masakadza’s century. Both teams were in the game till the last over when Afghanistan were needed to score 10 runs off it. But Nabi kept his cool and steered Afghanistan to two wickets victory. 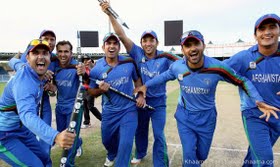 Chasing a score of 248 runs, Afghanistan made a good start to their inning. They were striking a good rate but kept losing wickets which put pressure on them. Mohammad Shahzad was the first man out for them when he was bowled by Jongwe for 25. They found themselves struggling when their half batsmen were back in hut at 121 in 27th over of the inning. The loss of fifth wicket brought Gulbadin Nabi on the crease and he changed the course of the game. Nabi added 85 runs for the 7th wicket with Rashid Khan who supported his well and scored 31 crucial runs.
Earlier, Zimbabwe had won the toss and elected to bat first. Masakadza batted with patient and showed his experience to guide Zimbabwe to 248. Such was the impact of Masakadza's 111-ball 110 that Zimbabwe had hoped for a score close to 280 at one stage. But Afghaistan’s bowlers bounced back in the death over’s to restrict Zimbabwe under 250 which gave them a moral boost going into the chase after slapdash middle period. Run scoring was not that easy on that track but Afghanistan bowled too weak and they were very sloppy in the field too. Masakadza cashed in on any lose deliveries and applied his shots for good effect.
Now both teams will take on each other on 8th of January for the 1st T20 of the two match series.
Player of the match - Gulbadin Naib (Afghanistan)
Player of the series - Mohammad Shahzad (Afghanistan)