India vs West Indies 2nd Test preview: Pant's form the only cause of concern

India will head into the second and final Test of the series against West Indies as favourites and, on a high, as the teams meet at Sabina Park in Jamaica.

India will head into the second and final Test of the series against West Indies as favourites and, on a high, as the teams meet at Sabina Park in Jamaica. India won the opening Test by an impressive margin of 318 runs, their highest margin of victory away from home.

Almost everything went right for India in the first Test apart from the start when they crumbled to 25 for 3. However, the early setback gave Ajinkya Rahane an opportunity to prove his worth as he roared back to form with a hard-fought 81, followed by a much-awaited hundred in the second innings. The Indian vice-captain could be a different player from here on.

Hanuma Vihari, also shone with the bat, nearly notching up his maiden hundred. Vihari's success could mean Rohit Sharma may have to wait longer for his chance in whites. India's bowling at Antigua was also excellent, with Ishant Sharma and Jasprit Bumrah helping themselves to five-fors with Mohammed Shami providing the additional support. 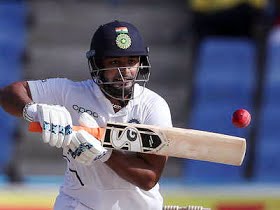 The only big cause of concern for India is the form of Rishabh Pant, who is having a horror tour. Except for one half-century, he has done nothing of note in the series, and the Antigua Test was another case of twin failures. There are calls to replace him with Wriddhiman Saha. Mayank Agarwal tasted his first failure so he will be keen to get back among the runs while KL Rahul should convert starts.

West Indies, if you take away the first hour at Antigua, were abysmal. Their batsmen just could not stand up to the fiery Indian pace attack. With no place for Chris Gayle, a lot will be expected from the experienced duo of Kraigg Brathwaite and Darren Bravo. The talent youngsters like Shimron Hetmyer and Shai Hope will also be wanting to perform.

The only plus for the hosts from the first Test was the performance of their new ball duo Shannon Gabriel and Kemar Roach. While the rest of the teammates struggled, the two constantly gave it their all and kept the game competitive.

As for the surface, the pitch at Sabina Park is expected to be a slow one. Hence, it would interesting to see the combination of the two teams. On current form though, irrespective of the conditions, India look set to clinch the series 2-0.