Australia off-spinner Nathan Lyon has agreed that the injury -- a split callus -- on the inside of his right index finger affected his bowling performance during the second innings of second Test at Bengaluru. Lyon finished with record-breaking figures of 8 for 50 in the first innings of that Test. Yet, Australia went on to lose the Test as the spinners were not as effective in the second innings.

“I’ve bowled a lot of balls over the summer and it usually happens once or twice a year. It just split. It was pretty painful there for a bit. And you can’t bowl on tape – there’s rules and laws out there that you can’t bowl on tape so I wasn’t even considering that,” Lyon was quoted as saying in a report by Indian Express. 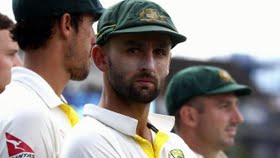 He did admit though that he is still facing issues while bowling during training. "I’m able to bowl cross-seam and stuff, so I can still try to spin it, But for variations and trying to get drift and drop and stuff – to go at the back of the ball – the way I bowl, it does impede it a little bit,” Lyon went on to add.

The veteran cricketer also went on to say that he was observing his counterpart R Ashwin keenly. “The way he constructs an over is one big thing. I have been studying the way he bowls to left and right handers in these conditions. The way he uses the crease, the different shapes he puts on the ball. We’re different bowlers, you can tell that when he comes out to Australia," Lyon explained.