India vs Australia: Chahal, Smith in war of words over two new balls

India's leg-spinner Yuzvendra Chahal took a dig at Steven Smith over his comments on Chennai ODI that Australia had it tough as they were up against two new balls throughout the match.

“If they would have won then they could have said that was a plus point because the ball came on nicely to the bat,” Chahal was quoted as saying in a Zee News report.

"Our minus point was that we had to bowl 10 overs each with a new ball. We bowled well, so whether it’s a new or old ball, it doesn’t matter. Australia had an advantage in the 20-over game, because the rule was not for a 20-over game and the extra fielder was always in the inner circle. 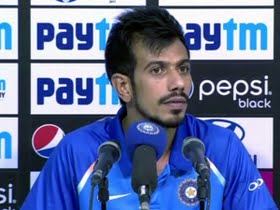 “But the plus was that the wicket was turning and the way our medium-pacers bowled at the start helped us put pressure on them from the very beginning. We never allowed them to get into the game,” he added.

The Aussie skipper Smith has earlier stated, "When you have two new balls from both ends, as you saw the whole game, they found it hard. It was the same for us. You don’t have a great deal of time to make things up. Perhaps we could have been a little bit more defensive at the start and go a bit harder,” he said.