Bumrah reflects on 2019: A year of accomplishments, learning, hard work and making memories

Reflecting on 2019 as the year comes to a close, India’s lead pacer Jasprit Bumrah stated that 2019 was a year full of “accomplishments

Reflecting on 2019 as the year comes to a close, India’s lead pacer Jasprit Bumrah stated that 2019 was a year full of “accomplishments, learning, hard work and making memories”. He further added that he is looking forward to “everything that 2020 has to offer”.

Although he has been injured for the second half of the year, Bumrah was India’s key wicket-taking bowler till then. He played a stellar role as India pulled off their maiden Test series win in Australia at the start of 2019.

In West Indies, Bumrah became the third Indian to claim a hat-trick in Test matches, after former off-spinner Harbhajan Singh and pacer Irfan Pathan, as the visitors won the series 2-0. Bumrah claimed sensational figures of 5 for 7 in the first Test at Antigua to go with 6 for 27 in the Jamaica Test. 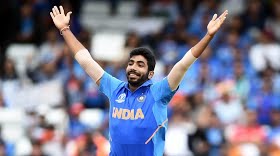 The pace spearhead finished the year as the number one ranked bowler in ODIs as sixth in Test cricket as per the latest ICC rankings. Ever since making his debut, Bumrah has been the go-to bowler for India across formats.

Bumrah has been missing from international action post - India’s tour of West Indies, following a stress fracture in his back. He has been chosen for the three-match T20I series against Sri Lanka at home in the New Year as well as the subsequent three-match ODI series against Australia.

In Bumrah’s absence, Ishant Sharma, Mohammed Shami, and Umesh Yadav combined brilliantly to lead India to Test whitewashes at home against South Africa and Bangladesh. 2020 will pose a greater challenge for Team India as they will be touring New Zealand, Australia, and will also feature in the World T20.