India became the second country and MS Dhoni is the first captain for ever to win all three ICC events.

India became the second country and MS Dhoni is the first captain for ever to win all three ICC events.

Before match: While MS Dhoni is looking to make history by winning all three ICC titles-T20, 50-over World Cups and Champions Trophy, Alastair Cook on the other hand is seeking to become the first successful ODI captain for England who have never won a title in the 50-over format.

No limited overs captain so far has ever held all three ICC titles. Ricky Ponting captained the Australian team to wins in both the ICC World Cup and Champions Trophy but was unable to win the World T20 Cup.

India's five-run win over England on Sunday has given their leader MS Dhoni a rare triple, that of becoming the first captain in world cricket to have won all major ICC trophies. 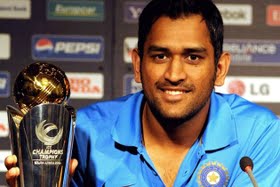 The ICC Champions Trophy followed Dhoni leading India to glory in the 2007 World Twenty20 and the 50-over (ODI) World Cup in 2011.

In addition to laying his hands on all three ICC trophies, Dhoni led India to the top of the ICC Test rankings in December 2009.