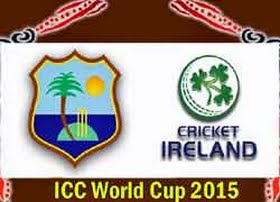 The pitch has a decent covering of grass but is expected to be good for strokeplay.

Kemar Roach needs two wickets to reach 100 in ODIs and Dwayne Smith, if selected, will play his 100th ODI.

The last ODI hundred by an Ireland batsman was William Porterfield's 112 against England at Malahide in 2013.

Three of Ireland's likely starting XI - Porterfield and the O'Brien brothers - played in the country's first World Cup game in 2007 when they tied with Zimbabwe, although on that day they made just 11 runs between them.