NZ v SL 2nd ODI: Martin Guptill continued his wonderful 2015 in one-dayers blasting an unbeaten 93 off merely 30 balls as New Zealand handed out another pasting to the hapless Sri Lankans.

Martin Guptill continued his wonderful 2015 in one-dayers blasting an unbeaten 93 off merely 30 balls as New Zealand handed out another pasting to the hapless Sri Lankans. Matt Henry and Mitchell McClenaghan again starred for the hosts, snaring seven wickets between themselves to keep the Lankans down to merely 117. The New Zealand openers, led by Guptill, needed only 8.2 overs to gun down the target. They won by ten wickets, even as Brendon McCullum did not come out to open the innings owing to a back injury picked up by the skipper while diving to save a ball. Incredibly, the game was still over before the scheduled lunch break. 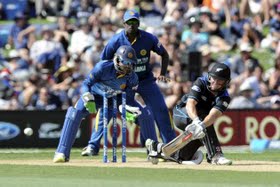 Guptill was in the mood right from the outset. The first ball he faced was hooked, and it went through the hands of leg gully for a four. That set the tone of the day, both for New Zealand and Sri Lanka in contrasting ways. Guptill hit eight sixes and nine fours in his 30-ball knock, which means well over 50 per cent of his runs came in boundaries. As the numbers suggest, there was some harsh treatment meted out to the Lankan bowlers. Dushmantha Chameera was hammered for 27 runs in one over while leg-spinner Jeffrey Vandersay's opening over in one-dayers went for 26.

Guptill's fifty came off 17 balls, and possibly missed out on AB de Villiers' record of fastest hundred only because Lanka hadn't enough runs on the board. Guptill was aggressive against all bowlers. He smoted Nuwan Kulasekara high over long on. He was deadly square off the wicket as well. A Chameera delivery was sent beyond the sightscreen, followed by a six between third man and point as well. Guptill then hit five boundaries off Vandersay, three of which went over the fence. One of the sixes was blasted well over long on as the Kiwis crossed 100 in seventh over.

For the second game in a row, Sri Lanka's batting floundered. Kulasekara again batted well to top-score, but this time he made only 19. Tillakaratne Dilshan continued to fail, caught at first slip as he charged at Henry and checked his shot. Danushka Gunathilaka was then brilliantly caught by a diving Mitchell Santner at cover. Lahiru Thirimanne also could not make much of an impression. He was out for 1, hitting McClenaghan straight to cover. Skipper Angelo Mathews needed to score big, and he batted out a few deliveries, but a short ball from McClenaghan again led to his downfall.

At the other end, Doug Bracewell got another key wicket, that of Dinesh Chandimal. He trapped the talented batsman lbw with one that came in. Things did not improve for Sri Lanka as Milinda Siriwardana and Chamara Kapugedara fell in the same over -- Siriwardana placed a short ball straight into the hands of point, while Kapugedara was run out after the kind of mix up that usually happens when nothing is going right for the team. Kulasekara came in and hit some fine strokes. But, with wickets falling at the other end, he couldn't do much. He was last man out, giving a simple catch to cover. The rest of the match was all about Guptill.