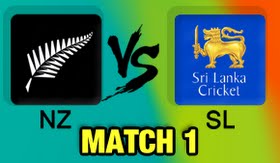 The New Zealand team has spruced up its cricket machine one part at a time over the past few weeks, bossing matches from the start at times, roaring back to win them at others, and now their public is as primed for the big event as they are, Sri Lanka's hope for the World Cup has not burst entirely, but it is spluttering about the room, deflating quickly. Wednesday's ignominious loss to Zimbabwe in a warm-up match was the final ill omen for many. Sri Lanka's fans are passionate, but are largely not obsessive.

1.Kumar Sangakkara has 13,693 ODI runs. He requires 12 to overtake Ricky Ponting and move to second in the all-time list, behind Sachin Tendulkar.2.To support the belief New Zealand are one of the three main contenders for the title, they have thethird-best win/loss percentagein ODIs since the start of 2014 of teams appearing this tournament. 3.Lasith Malinga averages 23.89 against New Zealand. Against other top eight nations, he has only done better against West Indies.  4.Since the beginning of 2014, Kane Williamson's ODI average has increased by more than 10 runs - from 35.41 to 46.265.Sri Lanka have defeated New Zealand in their last five World Cup meetings. The last time New Zealand beat Sri Lanka in a World Cup was in 1992.