A normally low-key domestic cricket game has suddenly become the talk of the town in sporting circles. A cricketer from Bermuda named Jason Anderson has been banned for life after indulging in a hair-raising altercation during a club match in the country

A normally low-key domestic cricket game has suddenly become the talk of the town in sporting circles. A cricketer from Bermuda named Jason Anderson has been banned for life after indulging in a hair-raising altercation during a club match in the country. Anderson, who was the wicket-keeper in the match for Cleveland County Cricket Club assaulted Willow Cuts Cricket Club batsman George O'Brien in rather shocking fashion. The incident took place during the Champion of Champions final played at the St David's Cricket Club Ground more than a week back.

Between two overs, as the batsmen were about to rotate the strike, Anderson went towards Brien, and caught him off guard, hitting and pushing him. The wicket-keeper even proceeded to hit him. A stunned Brien initially threatened Anderson, but as the wicket-keeper did not budge, and continued his assault, Brien raised his bat, and made what seemed like a genuine effort to knock Anderson down. The players as well as the officials tried to intervene, but it was too late by then, as the fight had turned into a wrestling match. The video of the incident has gone viral on the internet. 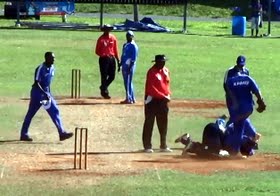 As per reports, Anderson has been banned for life from the game following the shocking developments. The Bermuda Cricket Board has found Anderson guilty of a Level 4 offence. On the other hand, Brien will not be able to feature in 6 Logic 50 over games. A cricket board statement read as follows, "Jason Anderson formally of Cleveland County Cricket Club has been found guilty of a Level 4 2.4.2 of the Code of Conduct: Physical assault of another Player and has been given a life ban from all cricket and any involvement in the game of cricket in Bermuda in any capacity "

On the punishment for Brien, the statement added, "George O'Brien of St. David's County Cricket Club has been found guilty of a Level 3 2.3.2 of the Code of Conduct: Threat of assault on another player and has been banned from all cricket for a period sufficient to include 6 Logic 50 over matches."

Trying to give some insight into the unbelievable on-field shocker, Cleveland captain Adam Douglas was reported telling a newspaper that some frustration may have built up for Anderson as he had dropped a catch, and missed a stumping. He, however, added that he wasn't aware of what exactly was said between the two players, which led to such an ugly spat. He also stated that he along with others tried to separate the two players. Unfortunately for Douglas and cricket, things had gotten hugely ugly by then.

The most infamous on-field brawl

Back in 1981, during the Perth Test, Dennis Lillee kicked Javed Miandad after which the Pakistani legend dangerously raised his bat in the bowler's direction, threatening to subdue him.