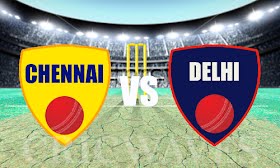 The decision to drop Gambhir, one of the most successful captains and batsmen in the tournament, may have been a tough one but Ricky Ponting has done that to himself in the past and is not shy of taking bold decisions. Franchises mean business at the end of the day and will look for results irrespective of the sentiments attached to a decision. Under-19 captain Prithvi Shaw showed his class in the last game and vindicated the management’s decision to stick to him over the senior pro Gambhir.
All of a sudden, Delhi looked like the team which was supposed to be one of the favorites at the start of the tournament. They batted beautifully with Shaw, Shreyas Iyer, Colin Munro and Maxwell all among the runs and then their bowlers backed them up. Yes, Trent Boult went for some runs, but he managed to set the tone early in the innings by dismissing two of the top three Kolkata batsmen. Avesh Khan was impressive once again while Amit Mishra found his groove for the first time this season.
Chennai, on the other hand, had a rare bad they with the bat as they gave the Mumbai a chance to stay alive in the tournament. While Rayudu and Raina continued their fine form, they struggled to find the firepower later in the innings. Skipper Dhoni was quick to acknowledge the fact that losses make a team humble and they will no doubt be learning from their mistakes.
The Chennai team management will be in a spot of bother as they look to find a replacement for their pace spearhead Deepak Chahar, who has been ruled out for two weeks with a hamstring injury. It will be interesting to see if the bring in another Indian youngster to beef up their bowling or alter their overseas balance to bring in someone like a David Willey or Mark Wood.

During his knock of 93 not out in the last game, Shreyas Iyer became the first captain to hit 10 sixes in an IPL innings. He also became the first DD player to hit 10 sixes in an IPL innings
Delhi last match brought an end to Gambhir record of captaining in 122 straight IPL matches for teams they played
Prithvi Shaw has had an amazing start to his career so far – he has five hundreds from ten first class games, has won an under-19 World Cup as captain, scored a fifty in just his second IPL game and had scored 546 in a school tournament in Mumbai. He is only just 18 years of age!