Bangladesh’s historic win against Windies: They made the difference

After leading the series 2-0, Bangladesh would have been disappointed had they lost the five-match ODI series to West Indies at home. They almost did, but for a team that loses more than it wins, the historic 3-2 victory margin...

After leading the series 2-0, Bangladesh would have been disappointed had they lost the five-match ODI series to West Indies at home. They almost did, but for a team that loses more than it wins, the historic 3-2 victory margin would have pleased them no end. Also, to achieve the feat in the absence of their talisman performer Shakib Al Hasan would have been even more heartening for the home side. Here’s a look at the men who made the victory possible for Bangladesh. 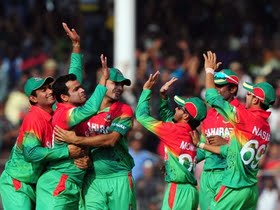 Mushfiqur Rahim: The Bangladesh captain led from the front, and was the man of the series, deservedly. He was unbeaten at the end when Bangladesh won the opening ODI, but his bigger contributions were to come later. In the second game, which Bangladesh won handsomely, Rahim smashed 79 in 87 balls. Thanks to his efforts, the home side made 292 in the game. He wasn’t finished yet though. When West Indies batted, the wicket-keeper skipper snared three catches behind the stumps as the visitors were rolled over for 132. He also contributed 44 in the fifth and deciding ODI.

Sohaq Gazi: This newcomer was nothing short of a sensation. The off spinner made a brilliant debut, bagging the man of the match in the opening game at Khulna. He picked up the key wickets of Gayle, Samuels and even Narine, who has smashed an important 36 in that game, and was threatening to undo Bangladesh’s good work. Thanks to Gazi, Bangladesh won the match by seven wickets. In the next game, he made another crucial contribution, grabbing 3 for 21, including the wickets of openers Simmons and Samuels as the home side thrashed West Indies by a massive 160-run margin. Gazi contributed with the bat as well, making a critical run-a-ball 19 during the chase that won Bangladesh the series.

Mahmudullah:The experienced all-rounder came to the party for his side, at the most crucial moment in the series. In the deciding game of the series, he came up with a wonderful all-round effort. Bowling first, Bangladesh restricted the Windies to 217, with Mahmudullah scalping the key wickets of Darren Bravo, who had made a half-century and Andre Russell for a duck. Bangladesh were in dire straits chasing the target, but Mahmudullah ensured that there was no collapse this time round. His quickfire 48 put Bangladesh out of trouble, and the lower order ensured that Mahmudullah’s knock was not in vain.

Anamul Haque: The talented batsman played the innings of the series, slamming 120 in the second ODI at Khulna. Batting first, Haque smashed 13 fours and 12 sixes in a knock that lasted 145 balls. On the day, the West Indian bowlers had no answer to Haque’s brilliance as every one of them was taken apart by Haque. Thanks to his innings, the home side put up a big score on the board. The bowlers also did their job as West Indies slumped to a 160-run defeat. Haque was the man of the match, without doubt.