India has received a blow ahead of the Second Test at Mumbai with fast bowler Umesh Yadav picking up a lower back injury.

India has received a blow ahead of the Second Test at Mumbai with fast bowler Umesh Yadav picking up a lower back injury. The Vidarbha Express had undergone a scan, the results of which are awaited. Umesh Yadav had missed the practice session on Wednesday at the Wankhede Stadium. 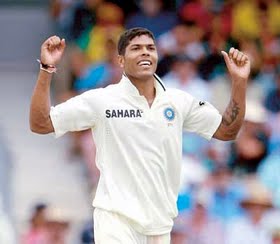 The Team Management has once again asked for Bengal’s wiry pacer Ashok Dinda to fly in to Mumbai as the injury cover. Dinda was the cover for Ishant Sharma during the first Test at Ahmedabad. If Umesh Yadav doesn’t play in the second Test, then his place is likely to be taken by Ishant Sharma who has recovered from viral fever.

India will miss the services of Umesh Yadav badly if at all the pacer is going to be ruled unfit. Yadav has been the quickest of bowlers in the country and in the First Test at Ahmedabad, played a vital role in taking four key wickets to help India win the match. The Second Test will be played at the Wankhede Stadium from tomorrow.