England was declared winners of World Cup 2019 after a pulsating final at Lord's. Batting first, New Zealand managed to post 241 for 8 on the board.

England was declared winners of World Cup 2019 after a pulsating final at Lord's. Batting first, New Zealand managed to post 241 for 8 on the board. England also responded with 241, getting all out with two frenetic run outs at the end.

The match went into the Super Over. England managed 15 with Ben Stokes and Jos Buttler, both of whom hit the fifties earlier in the game taking on Trent Boult. In response, New Zealand also scored 15 courtesy a smashing six off Jofra Archer, but Martin Guptill was run out coming back for the 16th run off the last ball.

Even though both the 50-over game as well as the Super Over were tied, hosts England were declared winners as they hit number of boundaries in the match -- 26 as against New Zealand's 17.

The bizarre ICC logic certainly did not go down well with a number of ex-cricketers and fans. Here are some reactions. 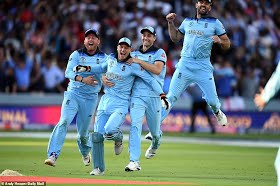 Gautam Gambhir: “Don’t understand how the game of such proportions, the #CWC19Final, is finally decided on who scored the most boundaries. A ridiculous rule @ICC. Should have been a tie. I want to congratulate both @BLACKCAPS & @englandcricket on playing out a nail-biting Final. Both winners IMO.”

Sanjay Manjrekar: Will remember the 2019 WC which had an England v New Zealand finals & had England & New Zealand as winners.#CricketWins

Michael Vaughan: Neither Team deserved to lose that .. What a day for Cricket .. that is how it inspires a new generation of cricketers .. #CWC19

Rajneesh Gupta: Never been an admirer of this boundaries count thing to decide a tie in the Super-Over. A shared trophy would have been a better result

Yuvraj Singh: I don’t agree with that rule! But rules are rules congratulations to England on finally winning the World Cup, my heart goes out for the Kiwis they fought till the end. Great game an epic final !!!! #CWC19Final” wrote Yuvraj Singh.

Brett Lee: Congratulations to England, Commiserations to New Zealand. I've got to say that it’s a horrible way to decide a winner. This rule has to change.

Srini Mama: Because one team scored more boundaries than the other, they are the winners. For what joy? Why can't it be "The team that has scored more singles will be the winner"? An absolutely ridiculous rule. @ICC, it's a real shame!

Majid Haq: NZ lost the super over & World Cup Final due to hitting fewer boundaries. Another rule that needs changing @icc we should have had another over to decide until we get an outright winner although it probably won’t happen ever again. #onceinalifetime #CWC19Final #ENGvsNZ

Stephen Holt: Well done to England but I’m genuinely confused how we have won the World Cup.

The scores were tied with NZ losing fewer wickets but we go into a super over?

The scores are tied again but England win because?