England’s no.3 batsman Jonathan Trott believes that his team has been preparing well for the upcoming Test Series in India.

England’s no.3 batsman Jonathan Trott believes that his team has been preparing well for the upcoming Test Series in India. The tourists have been given three warm-up matches ahead of the opening Test at Ahmedabad. England are already in Ahmedabad and will play Haryana in their last warm-up match prior to the first Test. 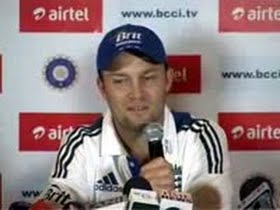 Trott speaking to the media says that England is in a good shape thanks to the training sessions in Dubai before reaching India and also said that the recent tour of Sri Lanka gave them good experience of handling spin. The top order batsman also said that he would be batting in at his regular position of no.3 and is not to keen on opening. England will possibly have a debutant opener in Nick Compton to partner Skipper Alastair Cook in the Test Series.

The first Test begins on the 15th of this month at the Sardar Patel Stadium in Motera, Ahmedabad which has been traditionally offered a red soil pitch to favour the Indian Spinners. England is yet to win a Test Series in India since 27 years and for that to happen, their batsmen will have to play extremely well against the spinners on the obviously expected turning tracks.