India’s constant batting collapses a definite cause for concern

India may have won the third Test against Australia at Mohali, but one aspect of their game, which is repeating itself with alarming regularity, was on show again on Day four of the Test. India collapsed from a seemingly impregnable position...

India may have won the third Test against Australia at Mohali, but one aspect of their game, which is repeating itself with alarming regularity, was on show again on Day four of the Test. India collapsed from a seemingly impregnable position, and although they ended up with an impressive score, it was way less than what the hosts should have got considering the start they were given by the openers. Even if one takes into account that the conditions helped the bowlers early on, and that, overall, the Aussies bowled much better, the batting submission was still unacceptable.

Remember, they began the day on an unbelievable 283 for no loss, and even though Shikhar Dhawan and Cheteshwar Pujara fell early on day four, they were still well-placed to get a 600 plus score, at 384 for 2. However, once Sachin Tendulkar was dismissed for 37, the Indian batting completely fell apart. Apart from Virat Kohli, who remained unbeaten on a half-century and Bhuvneshwar Kumar, who hung around to provide him staunch support, none of the other middle or lower order batsmen showed the inclination to apply themselves at the crease. Five of the last six batters registered scores of 4,8,4,0 and 1 respectively. 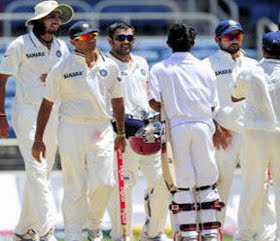 The Indian batsmen could have been forgiven if this was a one-off case. The harsh fact is this wasn’t. In fact, it has become a bit of an epidemic in Indian cricket of late. In the first Test at Chennai when India batted in their first innings, Ravindra Jadeja made 16, Ravichandran Ashwin 3 and Harbhajan Singh 11. Like in this Test, it was Bhuvneshwar Kumar (38), who occupied the crease to give company to M S Dhoni, who blasted a double hundred. Further, at Hyderabad, numbers seven, eight, nine and ten contributed 10, 1, 0 and 10 respectively. Like in Mohali, it was the one big partnership, between Pujara and Vijay on that occasion, which kept India ahead.

The story was pretty similar in the England series as well, if anything only worse. In the second Test at Mumbai, India were cleaned up for 142 in their second innings. Gautam Gambhir got 65 of them, and of the other ten batsmen, only Ashwin got into double figures, making 11. It was a procession of sorts as wickets fell one after the other. In the next Test at Kolkata, India fell from 215 for 4 to 316 in their first innings, and in the second innings, they went from 98 for 1 to 247 all out. Even in the drawn game at Nagpur they crumbled to 71 for 4 before recovering to 269 for 4. But, they again collapsed from that strong position to fold up for 326.

Team India may be dominant at present against the struggling Aussie outfit, but they still clearly aren’t playing their best cricket. Unless they learn to rein in their batting deficiencies, India could get themselves into greater trouble against stronger teams.