Having recovered from the heavy drubbing received at the hands of Sunrisers Hyderabad, Mumbai Indians will be keen to continue the winning run when they face a pathetic Kings XI Punjab at their adopted home ground at Vizag.

Having recovered from the heavy drubbing received at the hands of Sunrisers Hyderabad, Mumbai Indians will be keen to continue the winning run when they face a pathetic Kings XI Punjab at their adopted home ground at Vizag. Mumbai were thrashed miserably by Hyderabad a couple of games back, by 85 runs to be precise. However, they showed a lot of character to come back with a good all-round effort against Royal Challengers Bangalore. As for Punjab, placed last in the points table, they are already out of the race as far as progressing ahead is concerned. All they can do now is hope for some consolation wins.

Mumbai's impressive show against Bangalore had a lot to do with their terrific bowling effort on the day. Although Bangalore as a team have not succeeded in this year's edition, their has been among the most dangerous, and also perhaps the most consistent batting line up. Mumbai's bowlers however were successful in keeping them down to a low total, a significant achievement for a bowling side in IPL 9. They put up a decent effort with the bat as well in the chase. Although it wasn't as ruthless an effort as they would have liked, crucially, it was good enough to claim them a win.

Without doubt, Krunal Pandya's bowling spell on the day was the brightest spot for Mumbai. He was at his frugal best, and ensured Bangalore never recovered completely from a poor start. There were impressive acts from the others as well. At the top, both the Kiwi pacers Tim Southee and Mitchell McClenaghan picked up big wickets. As always, Jasprit Bumrah was successful in keeping things tight while veteran offie Harbhajan Singh continued to hold one end up. Kieron Pollard bowled an expensive over, when he didn't need to.

Even though Mumbai had a small total to chase against Bangalore, their batsmen still had a task to do, which they did rather successfully. Mumbai skipper Rohit Sharma has been the standout batsman for the team in the series, and would want to continue the impressive work. Parthiv Patel has played a couple of match defining knocks at the top of the order. Ambati Rayudu also has been crucial to the team's fortunes, coming in and playing the fluent knocks. Pollard and Jos Buttler are two of the hardest hitters of the cricket ball, and while they have been inconsistent, they did display their talent against Bangalore. 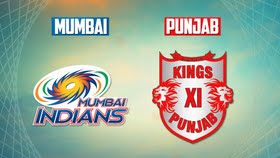 For Punjab, it has been one big un-king like show. They picked a number of big names in the batting in the hope that they can win them matches with their batting talent. But, that has far from been the case. Skipper David Miller has been a big flop, and has lost his leadership as well. Glenn Maxwell too hasn't lived up to the hype around him while Shaun Marsh is out injured. Murali Vijay has picked up his game in recent matches, but his improvement has come a bit too late. In the bowling, they haven't found a single match-winner who can swing games their own way. Another tough task awaits them as they face a big opponent.