Punjab registered a come from behind victory to win their fourth win on trot and keep their playoff hopes alive. Jordan, Arshdeep gave away only 7 runs in the last three overs and also picked up three wickets apiece as Punjab beat Hyderabad by a slender 12 runs.

KXIP were put into bat first by Warner and out came Rahul alongside his new partner Mandeep Singh, who was playing today in place of the injured Mayank Agarwal. They gave a rather sedate start as only 13 came from the first three overs. Just when they started to open up, Mandeep was caught well at deep square leg by Rashid Khan, giving Sandeep Sharma his 100th IPL wicket. Gayle wasted no time in settling in and started going after the bowlers straightaway. He hit two boundaries against his countryman Holder and then took on Rashid for a six. After that, bowlers were able to slow things down and that resulted in wickets off successive deliveries. Gayle holed out to Warner at long off on the last ball of the 10th over. Very next ball, Rahul was outfoxed by Rashid’s wrong ‘un for a run a ball 27.

Previous match heroes Maxwell and Pooran did the rebuild work, but after a few quiet overs, big show Maxwell tried to take on Sandeep Sharma, only to find Warner at long on. Hooda survived only two deliveries after getting stumped off Rashid, with the score at 88-5 at the end of 15 overs. Pooran had no option but to bat through as he had run out of recognized batsmen at the other end, and that meant that Punjab went without a boundary more than 10 overs. He did manage to hit a couple of boundaries as his team had to settle for a score of 126-7. 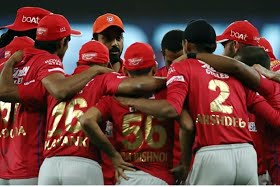 Warner and Bairstow began the chase on a positive note and managed to hit at least a boundary per over throughout the powerplay. Warner in particular was severe against Shami as the senior Indian pacer was leaking runs at a rate of around 9 runs per over. Spin was introduced as early as the 4th over in the form of Murugan Ashwin, but it was Bishnoi who drew first blood as he got rid of Warner for a crucial 20 ball 35. Punjab were in the middle of a great comeback as Ashwin bowled Bairstow. Sensing an opportunity, Rahul gave the ball to his frontline pacer Shami and the bowler repaid the faith shown in him by getting rid of Samad for just 7 runs.

At 67-3, the equation required was well under run a ball and it was Sunrisers match to lose from there. Manish Pandey and Vijay Shankar, who stitched a match winning partnership in their last match, would have wanted to do the same this match too. They did make sure that no wickets fell but in that process, they ate a lot of dots, especially Pandey. Shankar did hit three boundaries in the 14th and 15th over to keep them afloat. Bishnoi kept things tight for Punjab as he finished his bowling with figures of 4-0-13-1.

With 27 required from 24 and two vastly experienced batsmen at the crease, no one would have backed Punjab to win from that point. It was a moment of brilliance in the field from substitute fielder Suchith that brought Punjab back in the game after he took a stunner to dismiss Pandey for a 29 ball 15. Shankar got out next over as he edged one off Arshdeep and Punjab started to believe. Still 17 only were required from 12 balls but consecutive wickets by Jordan put Punjab back on top as he dismissed Holder and Rashid while just giving 3 runs in the over. With 14 required from 6, SRH had no option but to go for the biggies, but a calm Arshdeep Singh picked up two in two to seal the game for his side.