Sri Lanka bundle out Australia for 158!

Australia were bowled out for 158 in 40.5 overs after play resumed after a long rain interruption. The match got reduced to a 41-over contest and Sri Lanka’s target was revised according to the D/L Method to 152 runs.

The hosts would thank David Hussey to get something on the board as the right hander went onto score 58 from 64 balls with 6 fours batting with just the tail-enders. He was of course lucky to have been dropped early in his innings at thirdman by Lasith Malinga. Sri Lanka in total put down atleast three straightforward catches but their fielders were good in coming up with the run outs though.

It was a quick breakthrough for Sri Lanka after the rain break with Clint McKay (3) lbw to an arm ball from Rangana Herath to reduce the hosts to 95 for 7 in the 29th over. In the 32nd over, Brett Lee got run out by a direct throw from Perera trying to steal a single from mid off. Sri Lanka missed out in taking the remaining two wickets cheaply because of some sloppy bowling and fielding.

David Hussey went onto add 49 crucial runs with no.10 Mitchell Starc before he got out in the penultimate over of the innings. He got out slashing Perera into the hands of deep point. With one more ball left in the innings, Mitchell Starc (17) got run out trying to take a risky single from Nuwan Kulasekara at mid off.

The pick of the bowlers for Sri Lanka was Farveez Maharoof who took 2 for 18 in 8 overs before the rain break in what is his comeback game. 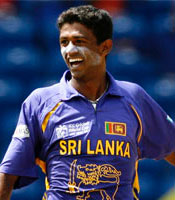 Update at the Rain Break : Rain provided a temporary relief for Australia at the Sydney Cricket Ground with the hosts struggling at 88 for 6 in 26 overs. Sri Lanka were all over Australia, chipping away at the wickets at regular intervals and ensuring there was not a single partnership coming through from the homeside.

Australia’s woes started in the 5th over when David Warner (13) flicked at a slower one from Lasith Malinga early to spoon a catch to mid on. After a few dull overs, stand-in Skipper Ricky Ponting too fell in a similar fashion, pushing at the ball early and spooning a catch in the infield. This time the bowler was Farveez Maharoof and it was a slower one which was patted back to him by Ponting in the 11th over.

The hosts at the score of 37 lost one more wicket with opener Matthew Wade (15) getting run out following a mix-up having struck a drive to the diving Thisara Perera at covers and hesitating mid-pitch after leaving his crease. There was a promising partnership growing between the inexperienced Peter Forrest and Michael Hussey but the Lankans cut it short to just 23 runs. The big wicket of Michael Hussey (13 from 23 balls with a four and a six) fell down just the ball when he had pulled Mathews for a six over deep mid wicket. The left handed edged his next delivery to the keeper in an attempted square cut.

Before the rain came down, Sri Lanka got two more wickets. First was Peter Forrest (16) edging his backfoot drive to first slip off Maharoof in the 21st over. The last wicket to fall before the rain break was that of Daniel Christian (6) who got lbw to Thisara Perera playing right across the line to an inducker. Australia at the rain break were left with David Hussey (on 15*) with Clint McKay (0*) and the tail to follow.

Toss and Teams : Australia have won the toss and elected to bat first in the 6th Match of the CB Series at the Sydney Cricket Ground against Sri Lanka. Australia are being led by former Skipper Ricky Ponting for just this match with Michael Clarke resting because of a hamstring strain. Michael Hussey has come in for Clarke while Brett Lee returns back to replace the injured Ryan Harris. And lastly, Xavier Dohery’s back seems to be alright and he will play today.

Sri Lanka have made two changes with Upul Tharanga and off spinner Sachithra Senanayake making way for Lahiru Thirmanne and Farveez Maharoof.

The pitch has a nice grass cover which means that there should be good pace and bounce in this Sydney pitch.