KKR Vs PW: The two mistakes of Yusuf Pathan

Without doubt Yusuf Pathan played a sensational knock in Kolkata Knight Riders’ do-or-die clash against the extremely poor Pune Warriors. His innings took Kolkata to the doorsteps of victory.

Without doubt Yusuf Pathan played a sensational knock in Kolkata Knight Riders’ do-or-die clash against the extremely poor Pune Warriors. His innings took Kolkata to the doorsteps of victory. At the same time though it is also a fact that it was Pathan, who had a big role to play in Kolkata’s loss, since he committed two crucial mistakes. First, his failure to respond to Ryan ten Doeschate ended a brilliant fighting partnership between Pathan and the impressive Dutch batsman. Secondly, his decision to kick the ball away with the foot while completing a run ended up in him being out obstructing the field, which was also a grave blunder. 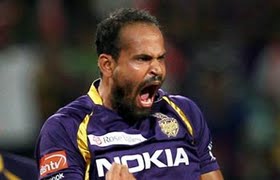 It would be fair to say that Pathan was at fault on both occasions. He failed to respond to call from ten Doeschate for a quick single, which was definitely on considering the format. The run out of Doeschate gave Pune a chance to come back into the game. Pathan then kicked himself in the foot, quite literally. While his decision to go for a quick single was understandable, there was no rationale behind him kicking the ball away in spite of the fact that the bowler Wayne Parnell was going for the ball. The decision to give him out by the field umpires was a fair one.

While Pathan’s dismissal all but cost them the match, Kolkata were poor overall as well. Their bowlers allowed Robin Uthappa and Aaron Finch to get off to a great start, and even after they were dismissed, Manish Pandey and Yuvraj Singh were put under no pressure. With the bat as well, most of the Kolkata batsmen bar Pathan and Doeschate were poor, and in the end their elimination was fair.

Aditya Tare’s sprightly half-century demonstrated what Mumbai Indians were missing at the top of the order in the earlier games. With Dwayne Smith coming in for Ricky Ponting one of the issues in opening slots was fixed. And, with Tare playing a swift knock against Rajasthan Royals on Wednesday, they could have found the men who can do a good job for them in the future. Of course, Smith did not play against Rajasthan, but he remains the best choice to open for Mumbai. Tare could be a proper second option, of course provided Sachin Tendulkar is willing to move down the order.

To their credit, Rajasthan fought back very well courtesy Shane Watson, James Faulkner and Kevin Cooper, who picked up some wickets quickly. The Mumbai batsmen did not help their cause –Glenn Maxwell and Dinesh Karthik disappointed, falling after getting starts. Their bowlers however rose to the occasion on the day. Mitchell Johnson and Dhawal Kulkarni were highly effective at the top of Rajasthan’s innings. The four quick wickets they shared among themselves early on derailed Rajasthan’s chase. Brad Hodge and Stuart Binny came up with a stunning counterattack, but they had too much to do.

Turning point of the game: Rajasthan losing 4 wickets for 28 inside six overs.