South African fast bowler Dale Steyn came up with a sensational spell of fast bowling to reduce New Zealand to 15 for 2 on a rain-curtailed day after the Proteas were themselves kept down to 263 all out. Only 16 overs were possible on the second day at Kingsmead, Durban, during which South Africa demonstrated enough to prove that this would not be an easy batting test for the visitors. The overcast conditions are definitely aiding the Proteas pacers, and with prospect for further rain on day three, Steyn and co are likely to continue keeping their opposition on their feet. 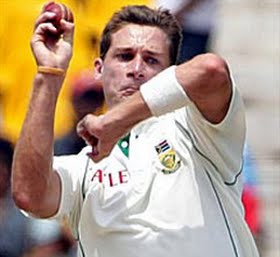 On a shortened day two, Steyn shone brightly. The fast bowler beat Martin Guptill with a number of outswingers, setting him up beautifully. He brought one in, and trapped Guptill right in front of the stumps more than once. The umpire had hesitation in raising his fingers once, but the second time, Steyn got the umpire to answer in the affirmative. At the other end, Tom Latham also struggled. While he tries his best to play close to the body, it was only a matter of time before the Latham fished at one outside the off-stump and was caught.

Steyn’s first spell finished with spectacular numbers – 6-4-3-2. The day ended with Ross Taylor and Kane Williamson at the crease. They spent three testing overs at the crease before rain sent the players in for early lunch. They never returned for the rest of the day. Both Taylor and Williamson have poor records in South Africa, so they will be keen to make an impression. But, Steyn will be looking forward to take them on, so will Vernon Philander. The conditions will definitely favour the South African bowlers on day three too.

Earlier in the day, South Africa resuming the day on 236 for 8 lost Steyn early. Tim Southee, who was wicketless the previous day, hit the pace bowler’s leg stump. Dane Piedt was the last man to fall, giving Trent Boult his third scalp. But, not before he aided Kagiso Rabada (32 not out) in adding a few crucial runs. The way Steyn bowled on Saturday, 263 could be worth a lot more.