Punjab roared back to the top four of the points table after an easy win against Kolkata. Mandeep’s 66*(56) and Gayle’s 51(29) was too much for the KKR bowlers to handle as Punjab registered their fifth win on trot.

KL Rahul won the toss and chose to bowl first. He couldn’t have asked for a better start from his team as three of KKR’s top four batsmen were back in the hut within the first two overs of the match. Rana was dismissed for a golden duck by Maxwell and Tripathi, DK nicked Shami’s outswingers to Rahul. At 10-3, the onus was on Morgan to rebuild the innings slowly but the KKR skipper had other ideas. He counterattacked, and though it looked ugly in the beginning, he got into the groove soon enough. He and Gill slammed 21 runs in Shami’s third over as the score reached 54-3 at the end of the powerplay. 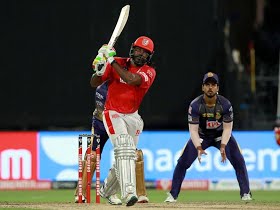 The assault continued after the powerplay too as sixes were scored easily against Maxwell and Murugan Ashwin. It was the young Bishnoi who broke the dangerous stand as Morgan holed out at deep backward square leg for a 25 ball 40. Previous match hero Narine couldn’t do much as he chopped onto his stumps against Jordan. Nagarkoti was sent ahead of Cummins and he struggled greatly against leg spin at offer by Bishnoi and Ashwin, with the latter getting him out for a 13 ball 6. Cummins followed suit as he ate as many as 8 balls for a solitary run before Bishnoi trapped him LBW. Gill, who was watching the procession from the other end, then combined with Ferguson to hit some crucial boundaries as KKR somehow got to 149-9.

Rahul and Mandeep got Punjab off to a cautious start, as the equation wasn’t challenging enough and this being yet another crucial game for them. Mandeep was struggling big time as he could manage only 3 runs from the 11 balls he faced at the end of 4 overs. After that, he found his form against Cummins as he smashed him for a six and a four in the 5th over. Chakravarthy and Narine kept things tight after the powerplay, with the former getting the prized scalp of the Punjab skipper.

Gayle put the pressure back on the spinners as he smoked two sixes against Chakravarthy in the 10th over. With the required rate above 8 runs per over, Mandeep and Gayle attacked thoroughly to make sure the rate didn’t go any higher. Mandeep was playing some extravagant shots, with the lofted shot over extra cover and the half pull to mid wicket being his most productive ones. Gayle was looking at his destructive best as he brought up his fifty in 25 balls. Mandeep too had gotten to a fifty, a hard working one at that, and his dominance against Cummins was just a delight to watch. Gayle got out with just 3 runs required from 12 balls, but Pooran and Mandeep carried them home with more than an over to spare.