It is a known fact that every time New Zealand find themselves in a corner, they somehow or the other manage to find a way out of it. It happened in Australia a couple of seasons ago when they were battered in the first Test and seemed like a hopeless case going into the second, but stung the Aussies...

It is a known fact that every time New Zealand find themselves in a corner, they somehow or the other manage to find a way out of it. It happened in Australia a couple of seasons ago when they were battered in the first Test and seemed like a hopeless case going into the second, but stung the Aussies in manner that left them dumbfounded. Against South Africa as well recently, they were drubbed like minnows in the Test matches, but returned the favour with a superlative showing in the shorter format matches that followed. Something similar transpired at Hamilton on Tuesday.

England went into the second T20 as favourites having gotten the better of the Kiwis with comparative ease at Auckland a couple of days ago. In fact they must have harboured hopes of clinching the series taking a cue from their professional display at Auckland, and New Zealand’s equally insipid show. Yet again though the hosts managed to show admirable courage to come back from a highly difficult position and turned the corner once more. The series has only been squared following Kiwis’ superlative performance at Hamilton, but the win would also do plenty of good to their confidence.

A lot of credit for New Zealand’s recovery should go to their skipper Brendon McCullum. Often in the past, McCullum has been criticised, and fairly, for not performing up to potential and, more importantly, on par with his vast experience. On Tuesday though he was in a league of his own in a format he perhaps enjoys the most. The man who got the IPL off to a magical start with his 158 for Kolkata Knight Riders a few years ago, was in his elements at Hamilton, and the English bowlers, who did so well at Auckland, had not answer to his blitz. 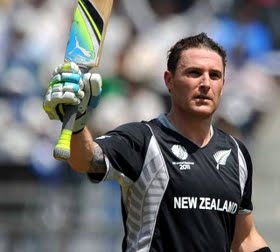 Unlike in some of the previous matches, McCullum, coming in at number three, batted till the very end of the innings, and gave all the English bowlers a hard time. The impressive aspect of McCullum’s batting, as it is always when does well, was his clean hitting. Six fours and five sixes in a 36-ball stay of 74 spoke volumes about the kind of zone the dashing Kiwi batsman was in. While McCullum was the key factor behind New Zealand’s victory at Hamilton, a lot of credit for the win must also go to openers Martin Guptill and Hamish Rutherford. Not often in the recent past have New Zealand got off to good starts. This time they did, and the results were instant.

The Kiwis must also be complimented for not taking things lightly in the field. They bowled with heart, knowing well that the Englishmen would be going after them right from the start. But for Jos Buttler, who made a sensational half-century with the aid of some clean hits, none of the batters could get the better of the New Zealand bowlers – a tribute to their commitment. Their fielding was also top class, which resulted in a run-out. All in all, a near perfect performance by the ever-dogged Kiwis.