India managed to secure a comfortable victory over Bangladesh in the third one-dayer on Wednesday, but it did not count for much as they had already lost the series having been defeated in the first two matches.

India managed to secure a comfortable victory over Bangladesh in the third one-dayer on Wednesday, but it did not count for much as they had already lost the series having been defeated in the first two matches. As Bangladesh celebrate their historic achievement, we point out 5 reasons why India lost the series.

Poor batting: Without doubt, this was the chief cause of India's disappointing loss. Only two batsmen got fifties in the first two games, as India's batting floundered. In the first game, they got off to a good start chasing 300 plus, but once wickets started crumbling, they lost their way. Something similar happened in the second match as well, with India collapsing 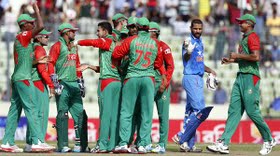 after Shikhar Dhawan and Virat Kohli featured in a decent partnership. The problem for India in the series was that they kept losing wickets in patches, as a result of which they could not build any decent partnerships, and it eventually hurt them.

No consistency in bowling: Although the batsmen were the major culprits in Bangladesh, the bowlers must also take part of the blame. They seemed clueless in the first match in the face of an onslaught from the Bangladesh openers. It seemed as if they were bowling to Australian openers. If you look at the performance of the bowlers over the course of the first two games, only Ravichandran Ashwin was consistent. Umesh Yadav was taken for runs easily, so was Mohit Sharma. Dhawal Kulkarni did well, but the rest needed to provide better support. India also failed to keep Bangladesh down after they had them in trouble.

The Mustafizur factor: Nobody would have thought at the start of the series that a man named Mustafizur Rahman would be the difference between the two sides. But, as things panned out, that was exactly the case. The left-arm seamer took international cricket by storm claiming 11 scalps in his first two games. Rahman bamboozled Indian batsmen with both pace and guile. To put his achievements into perspective, only one other bowler has claimed five-wicket hauls in his first two ODIs.

Questionable selection: Virat Kohli hinted during the series that there was a confused atmosphere in the dressing room, which led to questionable selections. The point raised has sent media into a tizzy, who are wondering whether Kohli is taking a dig a MS Dhoni. Whatever be the case, dropping Ajinkya Rahane from the eleven for the last two games was a shocking decision. Rahane, after all, had done nothing to deserve the axe. Irrespective of how Ambati Rayudu performed in the final game, Rahane's sacking stood out like a sore thumb.

Bangladesh batted well: While criticising India, it is important to give credit to Bangladesh as well. Their batsmen, experienced and newcomers, put up a spirited show to lift the side. Tamim Iqbal and Soumya Sarkar kicked off the series in a perfect manner, Shakib Al Hasan played his part with two fifties which Mushfiqur Rahim, Sabbir Rahman and Nasir Hossain all made crucial contributions. It was a complete team effort by Bangladesh.