WI vs ENG 2nd Test: James Anderson got three big wickets to trigger a familiar West Indies collapse and, in the end, it was all easy for the visitors as they won by nine wickets.

The fifth and final day of the Grenada Test between England and West Indies began with not much to look forward too. With West Indies having easily overtaken England's first innings total, having lost only two wickets, thanks in main to a ton from Kraigg Braithwaite, another draw seemed to be in the offing. But, when the opponent is West Indies, you almost always never give up. This is exactly what England did. James Anderson ran in hard, and got some great purchase off a fifth day pitch, though there wasn't much in it for the bowlers. He got three big wickets to trigger a familiar West Indies collapse and, in the end, it was all easy for the visitors as they won by nine wickets. 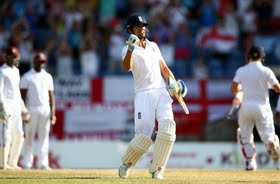 West Indies resumed day five on an impressive 202 for 2, with Braithwaite and Marlon Samuels at the crease. The first few overs went without much activity, but Anderson gave England a boost after he dug one in short and forced the centurion to fend it to Joe Root for 116. West Indies were still in a comfortable position, but the massive wicket of Shivnarine Chanderpaul for 7 put England ahead. The veteran left-hander edged one to slips off Anderson, where Ian Bell pouched at one, but could not hold on. Skipper Alastair Cook was however alert and grabbed the rebound to bring joy to the English camp.

At 238 for 4, the responsibility of shepherding the innings was now in the hands of Samuels. However, a moment of indecision cost him his wicket as well. He was unsure of whether to leave or play at a delivery from Anderson and, in the end, the ball took the edge of Samuels' bat and Jos Buttler did the rest. Samuels had hung around for a little over 100 deliveries for his 37, but his dismissal left the team in greater trouble at 239 for 5. Once again, it was that man Anderson that turned things around for his team with his splendid spell of three wickets.

Even as Anderson did not pick up any other wickets during the course of the Windies innings, he continued to be involved. He took a catch to dismiss Jermaine Blackwood, effected a brilliant run-out of Jason Holder with a direct hit and took another catch to send back Kemar Roach. West Indies who had begun the day at a comfortable 202 had slipped swiftly to 282 for 8. Skipper Denesh Ramdin was still around, but he too fell for 28, trapped lbw by a Moeen Ali full toss. Ali dismissed last man Shannon Gabriel as well, and Windies collapsed to 307 all out. Anderson finished with impressive figures of 4 for 73.

With the bowlers having done their job, England needed only 143 for victory. Gabriel gave them some early hope, cleaning up Jonathan Trott for a duck. But Cook and Gary Ballance ensured there was no further trouble for England. Ballance was the more aggressive of the two, remaining unbeaten on 81 from 126 while Cook was unbeaten on 59 from 121. England eased to win by nine wickets. Joe Root was the man of the match for his splendid batting effort.