An unbroken stand of 198 between Darren Bravo and Marlon Samuels for the third wicket laid the foundation for a solid first innings total for the West Indies in the Second and Final Test at Khulna.

An unbroken stand of 198 between Darren Bravo and Marlon Samuels for the third wicket laid the foundation for a solid first innings total for the West Indies in the Second and Final Test at Khulna. The visitors closed the second day’s play at 241 for 2 in 82 overs having bowled out Bangladesh for 287 early on.

The second day began with Bangladesh at 365 for 8 with two well set batsmen in Mahmudullah and debutant Abu Hasan who scored a century on debut at no.10. The pair couldn’t repeat their magic this morning and were sent back to the pavilion without much damage. Mahmudullah (76 from 97 balls with 9 fours) was the first to go, caught and bowled by Darren Sammy off a fuller delivery to end what was a 184-run stand for the 9th wicket. Abu Hasan (113 from 123 balls with 14 fours and 3 sixes) followed Mahmudullah in the pavilion by fending off a lifter from Fidel Edwards into the slips. 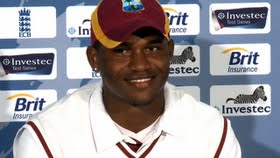 Fidel Edwards with the wicket of Abu Hasan wrapped up the Bangladesh first innings with his 6 for 90 in 18.1 overs. By Lunch, Bangladesh were feeling good by removing the West Indian openers – Kieran Powell (13, caught in the deep in a pull shot off Rubel Hossain) and Chris Gayle (25, caught down the legside in a sweep shot to off spinner Sohag Gazi).

The visitors went to Lunch at 62 for 2 with the pair of Bravo and Samuels who came back to bat out the remaining two sessions. Darren Bravo collected 85* (from 197 balls with 7 fours) and Marlon Samuels stroked his way to a 5th Test century. He remained unbeaten on 109* (from 231 balls with 13 fours and a six).